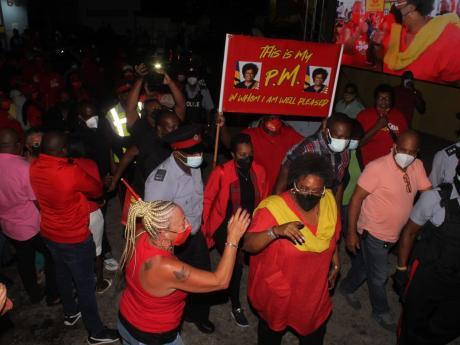 Prime Minister Mia Mottley among a throng of supporters after her party's election clean sweep in Barbados.

The ruling  Barbados Labour Party (BLP) was last night re-elected into government with a consecutive clean sweep of the 30 seats in Parliament.

Preliminary results showed that the BLP won the election that Prime Minister Mia Mottley called 18 months ahead of the constitutional deadline.

The BLP is the second political organisation in the Caribbean to sweep all the seats in an election on consecutive occasions.

The other organisation was the New National Party of Prime Minister Dr Keith Mitchell in Grenada.

Mottley, who had already signalled that this would be her last general election, told supporters that she would be announcing her new Cabinet on Monday and that later on Thursday, she along with Dale Marshall will go to meet with President Dame Sandra Mason to be sworn into office.

Mottley defended the decision to call the election ahead of the constitutional deadline, saying it was important to “take fresh guard” as the island moves into the future to deal with a changing global socio and economic situation.

“I thank you, you the people of Barbados for accepting us at our word that if we do not fix our problems starting from tomorrow, we will not be able to guarantee safety to our people in the next 10 to 15 years”.

Mottley said the three-week campaign had been rough.

After the 2018 clean sweep Bishop Joseph Artherely, who had been a member of the victorious BLP team, left to become Opposition Leader.

Joseph, who headed an alliance into the general election, was among the victims of the new clean sweep.

“Tonight the people of Barbados have spoken,” said Mottley, vowing the new administration would continue to put the nation's welfare above any parliamentary majority.

De Peiza, who led the DLP into a general election for the first time, was soundly defeated in the St. Lucy constituency, considered a strong hold of the party, polling 1, 095 votes as against 2,038 for the BLP's Peter Phillips.

De Peiza said that while she was conceding and congratulating the Mottley-led BLP, she had no immediate plans to step down as political leader.

"We will make those decisions at a later stage,” she said, adding that “I am proud of what I have established.”

She said that the voter turnout in the election “continues to be “depressing” adding that 'serious work will have to be done going forward.