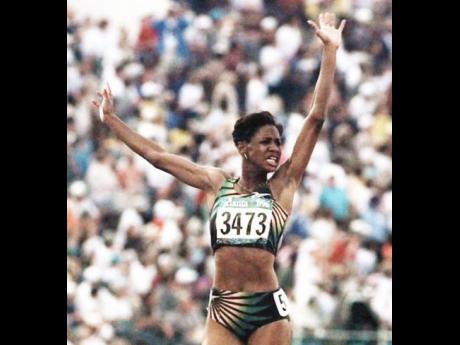 Jamaica rebounded from a poor outing at the 2017 World Championships in London, where we won only four medals, to winning 12 medals in Doha, brightening prospects for an even more bountiful haul at the 2020 Olympics in Japan next year.

It was a timely reminder of what this tiny nation and its outstanding athletes are capable of, as next weekend one of our best ever, Veronica Campbell-Brown, will be honoured with a statue at Independence Park in Kingston.

Asafa Powell will also soon have a statue mounted in his honour.

It is against all this wonderful news that I call on the government to commission a statue of Deon Hemmings to be mounted alongside her peers.

One of the unfortunate things about Jamaica is that we do not pay close enough attention to our own history. That history, and the history of our athletic prowess, should be taught in our schools from the prep and primary-school levels.

If we had been doing this, we would not have overlooked the value of Hemmings, who is the first-ever Jamaican woman to win an Olympic gold medal. That Hemmings does not have a statue already erected in her honour is a travesty.

Merlene Ottey and Herb McKenley, for all the great things they accomplished in athletics, never won an individual Olympic gold medal. Hemmings did. At the 1996 Games in Atlanta, she etched her name in the annals of Olympic history when she won the 400m hurdles in an Olympic record 52.82s.

In doing so, she created a new dawn for Jamaica, who, just four years before, fell just short of gold-medal glory with an incredible double-silver medal, performance in Barcelona.

She was not only the first female to win an individual gold medal but she also paved the way for people like Melaine Walker, Kaliese Spencer, Ristanana Tracey, Janieve Russell, and now Rushell Clayton, who, in Doha, won a bronze medal in the fastest women’s 400m hurdles race ever run.

It is time that we give credit where it is long overdue.

Hemmings would go on to the 2000 Olympics in Sydney, where she won silver medals in the 400m hurdles and the 4x400m relay with teammates Sandie Richards, Catherine Scott and the amazing Lorraine Graham.

She has also won other medals on the global stage – bronze in Gothenburg and Seville in 1995 and 1999 – and a silver medal in Athens in 1997. Add to that a World Indoor gold medal in the mile relay in Toronto in 1993 and her work behind the scenes helping athletes in Manchester realise their dreams, and you have a résumé for someone deserving of a statue in recognition of her contributions to the sport.