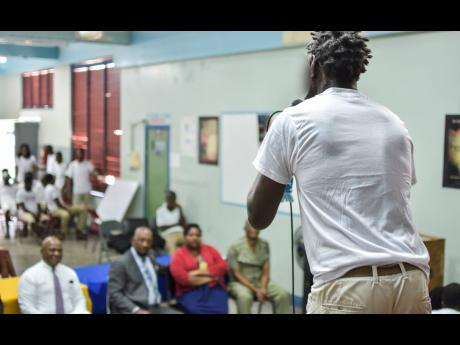 An inmate performs during an open day at the Tower Street Adult Correctonal Institution.

For the past year, music producers Mikey Bennett and Gladstone Wright have been working with inmates at both the Tower Street and St Catherine Adult Correctional Centres. Combining their efforts with the support of the Ministry of National Security, they aim to release two albums recorded by inmates and former inmates by the end of the summer under the Rehabilitation of Offenders through Music Programme.

While potentially changing the course of their lives, Bennett hopes the programme will also demonstrate the power of music as positive and uplifting. He hopes that this effort to rehabilitate will have a ripple effect - and alter the public's perception of music's influence.

And he doesn't care if the programme produces just one success.

"We're quick to blame, and we attribute a lot of credence to the fact that negative things in society have been supported by the music. If we believe that the music is that powerful in changing lives, we must also accept that it is powerful enough for positive. We acknowledge that it is so powerful that it causes people to drop, then we have to equally support the fact that it is transformative," Bennett told THE WEEKEND STAR.

Conceptualised and led by Wright in 2004, one of the programmes first participants was reggae singer Jah Cure. He was able to release Behind These Prison Walls, which put him back on radio and stage upon his own release.

Bennett continued: Throughout history, when you think about Johnny Cash or other people who have made that impact in prison ... . This is just a stumbling block for some people. And in terms of credibility, who better to tell people don't come to prison than someone who was in prison?"

"People have to figure that it makes sense. You have young people in here, and they say young people who are sent to prison have a greater chance of coming back. So if there's an alternative ... I'm not into the numbers. But if we can save one ... that one can multiply."

The first album is a collaboration with several artistes. It will comprise 16 to 18 songs performed by inmates and former inmates. "We're inviting a few international artistes to lend their voices on a few of the songs. Mutabaruka is going to join one of the individuals. He, has so, far agreed, and Agent Sasco has asked to hear the music before he takes a decision. I'm sure I'll get another two or three," Wright shared.

Jah Cure has already contributed his submission to the album that now awaits mixing and mastering. The second album will feature work by Serano Walker, an inmate at the Tower Street facility.