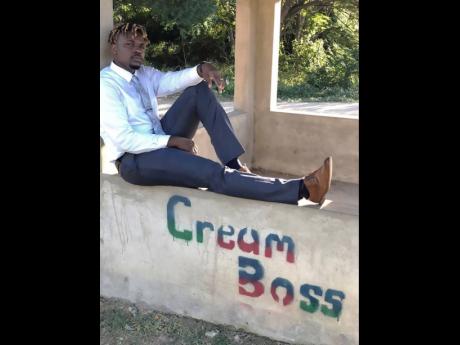 One way to break into the music industry is to give away cash on social media, and that's what up-and-coming, Trelawny-based recording artiste Cream Boss did.

Last year, the young entertainer made his way on to social media news feeds with the official dance challenge for his debut single, Stunt.

The competition closed on December 24, 2019, and out of five contestants, dancer @londysmashingskankaz walked away with a J$150,000 cash prize.

"It was a very transparent competition, for the most likes and comments. Each comment was worth five votes and each 'like' was worth one vote," Cream Boss told THE STAR.

Another way to get into the big time at the top of the charts is to get the children's attention.

"All the kids are repping for Cream Boss," he boasted. "It's not just the adult fan base, which is important because music is broadcast wider by the younger ones. Before I knew about Fling, I heard it from the kids. Once the kids get a hold of your music, it gone ah lead. So Cream Boss has to represent for the younger generation as well."

The aspirant should know what he's talking about, because those he is trying to make into fans are probably already his customers.

Cream Boss' given name is Sashane Campbell, and he is a small-business owner who operates a few ice cream shops - hence the alias. So why heed the call of the dancehall?

He reasoned that music transcends time, and used Ben E. King's Stand by Me as a reference.

"I'm pretty sure that that song was recorded at some time during my grandparents' young age. And music gets you into everything. If your music is clean enough, it will be aired at church at some point in time. That's why (I do) music," he said.

Cream Boss added that he has two more songs with "much longer shelf lives".

"The next song is called Melanin, and it speaks to the upliftment of the black race on a whole. Skin-bleaching products, we haffi bun dem ting deh. And it's not only physically. Mentally, a lot of persons are being 'de-melanised'. I'm one of those persons that is full 'African-ised'. I believe in the empowerment of my own race," he told THE STAR.

He is also upbeat about the more hardcore dancehall song Money Counter.