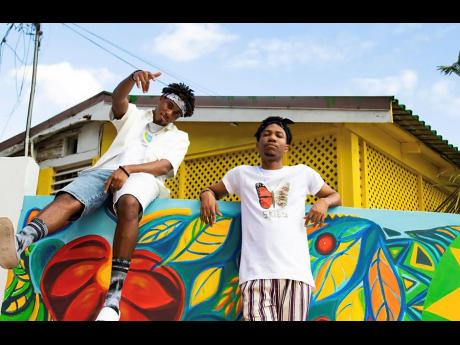 The local entertainment industry is physically dormant in the wake of COVID-19, but there is still new music to get into.

Among those still moving and shaking despite the global pandemic panic is Los Angeles-based Jamaican rap duo FRIDAY NIGHT CRU.

Taking on a very millennial approach, the pair has released their latest single, Follow My Lead, featuring Tessellated and Ghanian singer Amaarae.

However, unlike many other vocalists who use dancers to help promote a song, the CRU members, Djavan 'KinDah' Warner and Damani 'Dash D' Gardner, took on the choreography themselves.

"Creating a dance video gave us another visual marketing alternative to others who might want to see something closer to home," said Dash D, now accustomed to reaching out to fans from the US West Coast. "Dance is a fun and creative way that is linked to our country's heritage. We have always enjoyed dancing like the next Jamaican, so incorporating that into our marketing plan seemed natural."

The moves may go beyond the frame to hit the stage.

"As for performing it live ... there will be a variation of it, we're sure," Dash D shared. He further revealed that KinDah knew Inspire from college.

"They both attended the University of South Florida in Tampa, so it was inevitable to get her involved in one of our projects," Dash D said.

The video was filmed in Gordon Town Square.

"We always thought that the square, especially since its renovation and the addition of Louise Bennett's statue, has been of great cultural significance, and we wanted to add our form of creative expression towards such a site," Dash D said.

Now available for distribution by Delicious Vinyl Island, Follow My Lead was premiered by Complex UK.

Tessellated, always remembered locally for his breakout song Pine & Ginger, and internationally, for his commercialised single for Apple AirPods, I Learnt Some Jazz Today, joins FRIDAY NIGHT CRU along with Amaarae.

She is popular in her native Ghana for her single, Like It. She was also listed as one of Apple Music's Artists To Watch.