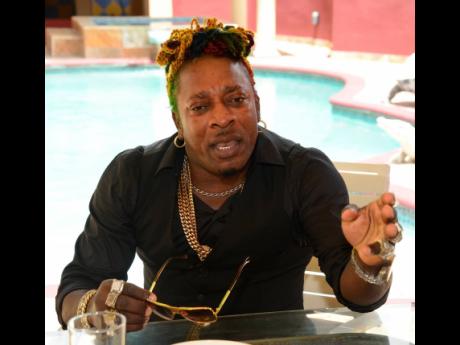 Dancehall artiste Elephant Man completed his 14 days in home quarantine on the weekend, and the entertainer says his time in isolation was such an eye-opening experience, he's leaving with more knowledgeable than he went in with.

"Me get time to meditate pan a whole heap a things weh a gwaan and really open me eyes to how dangerous this virus yah is," he told THE STAR. "I been paying a lot more attention to the news and it make me see this thing is so much bigger than I thought. The biggest lesson I've learnt is that this pandemic is crazy, and I just have to say big-ups to the prime minister and the Ministry of Health, because they are doing a great job. I get to see a lot of things going on all over the world and Jamaica is really handling this situation well."

He noted how the virus has affected persons in New York and Italy, and revealed plans to pass on the lessons he's learnt through music.

The 'Energy God' told THE STAR that one of the first things he did after being released from quarantine was hit the studio to record his latest single, Di Cure.

"My time away gave me the chance to write a lot, and this was one of the songs I did while in quarantine. From yuh hear the song you know this is a man weh really a see things for what they are now. Me put pen to paper and just do supmn weh make sense. By seeing certain things weh happen, me just wah do my part now to educate people," he said. "So inna di intro, yuh will hear me a say people fi stay in because this thing yah serious. We affi protect wi self and wi families. You nah go feel good if yuh nuh do the right thing and yuh end up affect others, so make we just do the right thing."

That country has been battling thousands of cases of the COVID-19 virus and was a red flag for officials at Jamaica's ports.

Elephant Man, who has to answer to charges of violating the Disaster Risk Management Act, says he just wants to move forward.

"I'm just staying positive because with what's going on right now, we need as much positive energy as possible. We done a face enough problems and negativity, and so we just a try fight that with some good," he said. "Me know people nuh wah live wid 'if me did know', so we just affi do the right things and keep we minds focused on doing good."