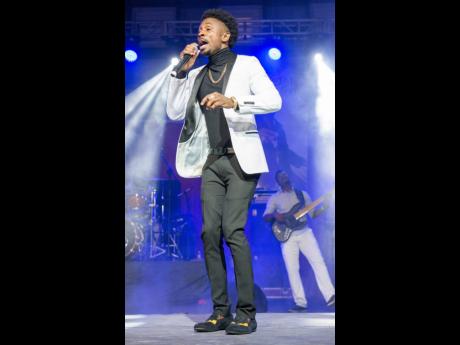 During Chris Martin's first online concert last Sunday, the comments showed that the vibe was right.

Approximately 10,000 fans tuned in to VP Records' YouTube channel, as the singer headlined the live-streamed concert launch of 'Telethon Jamaica: Together We Stand'.

With so many people tuning in, it would seem like a major accomplishment. But it's not the same as standing centre stage.

In a post-stream interview, Martin shared that the comments made it feel like the audience was front and centre.

However, he said there was a difference between performing for people while in their physical presence, with necessary direct interactions, and watching fans react in a comment box.

"It felt great, knowing that the people were into it," he told THE STAR. "Nothing beats a live show in front of people you can actually see, touch, interact with and feed off their energy right then and there."

He also expressed his hope to perform in front of a live audience again soon. The often sensual singer divulged that his relationship with the stage is almost romantic

"With all my heart, it's something I've loved, and a place I feel free and confident. It's like a girlfriend I haven't seen in a long time. I can't wait for us to link up again," he said.

As the Big Deal singer waits for the world to open up again with stages erect, the work continues. Last month, Martin released his latest single Big Big.

Fans can expect the accompanying visuals to hit the Internet soon, along with all other promotional exercises that are possible without hitting the road.

"There is no road right now. Everything is virtual. So promoting is all virtual now. Adapt or die. This is where true grit and resilience comes out," he said.

"Bless up Baka P. He reached out to me during this whole COVID vibes and shot me the idea. I loved it and the rest is history! Solid vibes and solid production," said Martin. "The massive is loving it so I'd say it's a hit! We just need this to blow over now so that we can put some fire visuals to it."

Telethon Jamaica: Together We Stand is a joint effort of the Entertainment Ministry, the Ministry of Foreign Affairs and Foreign Trade, and the Health Ministry, with a bid to raise US$10 million in the fight against the COVID-19 pandemic.

Proceeds will be used to provide additional resources for health services, including ventilators in hospitals and personal protective equipment for front line staff.

Slated to air this Sunday, the telethon feed will be rotated across various regions of the world so that all members of the diaspora, and other well-wishers will be able to view and make donations. A portion of the broadcast will also be carried live on TVJ, 1spotmedia.com and other platforms across the diaspora.