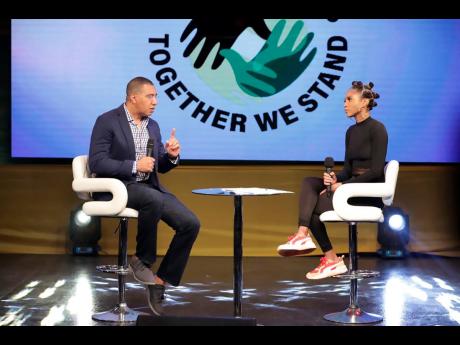 Prime Minister Andrew Holness talks with Naomi Cowan during Sunday’s staging of the Together We Stand telethon. 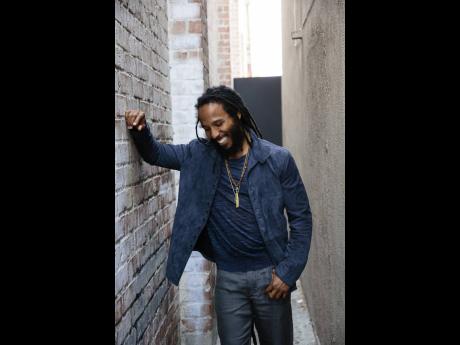 Ziggy Marley was among the many artistes who participated in the telethon held to raise money to purchase personal protective equipment for frontline workers in the fight against the novel coronavirus.
1
2

As a team works to convert currencies and collate the pledges that are still coming in from Sunday's staging of Telethon Jamaica, Together We Stand, plans are being put in place for a rebroadcast of the six-hour concert.

The event saw a long list of celebrities joining forces with the Government to raise some $1.3 billion to purchase personal protective equipment for frontline workers in the fight against the novel coronavirus. It featured performances, pleas, and pledges from local and international stars, but still didn't reach as wide an audience as it could.

"It was a fantastic show of generosity and the strength of the human spirit. We will be formally thanking all who participated but I wanted to advise that the Telethon is ongoing as we seek to engage with persons who live in different time zones. There will be an ongoing re-broadcast with live links from those areas," Minister of Culture, Gender, Entertainment and Sport Olivia 'Babsy' Grange told THE STAR.

"It's really about reaching those people in different time zones, who were not able to log on or it wasn't comfortable for them," said Andrew Clunis, director of marketing and communications at the Jamaica Cultural Development Commission, an agency of the Ministry of Culture, Gender, Entertainment and Sport. "We know that not many people would have been able to stay up all night to be able to pledge, and they have been very concerned, and they've been reaching out and asking, can we repeat it," he continued.

As the Telethon team awaits the preliminary tally of pledges collected on Easter Sunday night, they are back in discussions about bringing it back one more time. "People out there really want us to do it, because they missed it. But we recorded it, so we're gonna put the stream up as soon as the edits are done. Then we will broadcast it and people will be able to go and pledge again," Clunis said.

Grateful for the support that has already been given, Grange offered her thanks to the crew, talent, audience and those who will tune in soon. She also alerted that people don't have to wait until the rebroadcast to pledge.

"I wish to thank all who came together with hands, hearts and pockets to make the Together We Stand Covid-19 Telethon a reality. The telephone lines and the website are still up and running so if you missed the opportunity to donate yesterday, you can still do so. Visit www.japromise.org to contribute to this worthy cause. Our frontline workers thank you. God bless," she said.

The virtual concert was spearheaded by an alliance of global diaspora organisations, with the endorsement of the Government of Jamaica. The main stream was hosted on VP Records' YouTube channel. According to VP representative Michelle Williams, the stream did not dip below 11,000 viewers. "At one time, 12,000 was the top number," she told THE STAR. Within 18 hours, the telethon totalled 175,000 streams. "Numbers are still climbing because the UK and Europe are probably catching up because of the time difference," Williams said.

Though a showcase of Jamaican entertainment, the telethon demonstrated local music and culture's global impact. While pulling some usual suspects like George Nooks, the showcase also included a performance by emerging R&B 'Koribbean' act Eskoh, established Cuban-American living legend Gloria Estefan, appearances from the Marley brothers, dancehall's queen of the stage Spice, and a host of others.