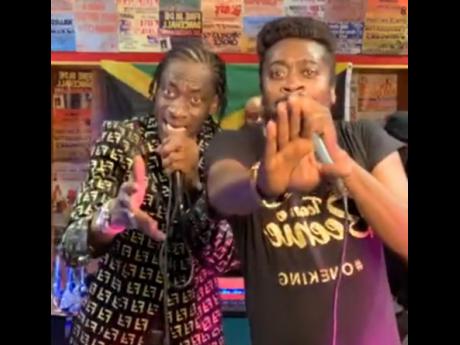 Bounty Killer and Beenie Man during the Verzuz clash streamed on Instagram LIVE.

Minister of Culture and Entertainment, Olivia 'Babsy' Grange said she has always been proud of Jamaica and it's culture, but is tonight immensely overjoyed after witnessing a historic clash between former musical rivals, Bounty Killer and Beenie Man.

Minister Grange told the STAR a short while a go, that she has been left speechless by what she just witnessed, so much so, she could only adequately express her emotions with the phrase 'me glad bag buss.'

"This evening even further strengthens my resolve and commitment to work with the industry, the artistes, people like Bounty and Beenie to ensure that we continue to be centre stage in the world."

"I'm so proud of Bounty and Beenie. We have moved after many years from bitter rivalry to friendly rivalry and a unity that just brings a smile to the faces of all who have been able to witness the growth and maturity. The music has come of age and it shows that as Jamaicans we have a music that binds us together no matter what," she continued.

The battle saw close to half a million viewers tuned in including the likes of Rihanna, Diddy, DJ Khaled, Missy Elliot, Busta Rhymes, Snoop Dogg and many more big names in music.

The local entertainment fraternity also showed up to support to of their own with the likes of Konshens, Buju Banton, Sean Paul, Popcaan, Spice, and Damian Marley tuned in.

Minister Grange says if there were ever doubts about Jamaica being the entertainment capital of the world, those arguments were settled tonight.

"There is no question or doubt, Jamaica's music is the most powerful music in the world. That was proven again tonight with how many celebrities both local and international tuned into the clash," she added.

"It's a music that generates all types of emotions, a music for all seasons and a music that brings the world together and this evening is a perfect example. We brought stars, ordinary people, music professionals, politicians, everybody. We were able to bring them together in the same virtual space for this wonderful experience. I was there at the beginning when Bounty and Beenie were at odds and I'm just so happy I am able to witness them at their best when they are working as one in unity for the upliftment of the culture," expressed Minister Grange.