Weddy Time steps out with ‘Currystain’ 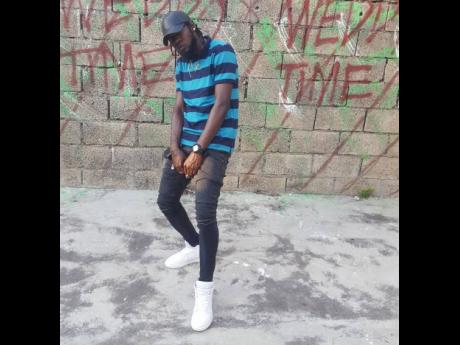 For years, dancehall culture has showcased the vibrant artistry of matching movement to hot and trending tracks.

Dance legend Gerald 'Bogle' Levy made the successful crossover from dancer to artiste, integrating the two worlds in songs and performances. So has popular recording artiste Ding Dong.

Looking to follow in their footsteps is Weddy Time with his new song and dance, Currystain.

Born in Portland and specifically raised in Buff Bay, Weddy Time, whose given name is Swayne Masters, always had a passion for dancing.

"I started dancing when I was 15 years old, but I started my career in 2006," he told Dancers' Paradise.

He was planning to create a dance group in Buff Bay, but, according to him, other recruits weren't as serious or as determined as he was.

A group member came up with the name 'Weddy Time Dancers' in honour of the late Bogle, and they all loved it. Despite his best efforts, the team didn't last long. Weddy Time brought the idea to life, branching out on his own.

Moving to Chalky Hill, St Ann, he made a name for himself as an energetic entertainer. He knew his dancing career had become official when he began receiving bookings from clients to teach dance classes and attend parties.

He developed quite a fan base, too. When in Kingston, he rolls with the Get Dere Squad. Otherwise, he maintains a solo act.

Currystain was initially created as a new dance move. Persons gravitated to it in the streets, and that inspired him to build a song to both accompany and further promote the dance.

"People from different countries reach out to me and say, 'Bro, we like the energy. We love the song and the dance move'. You can do any dance to it because I made the song based on the roots of Jamaican culture," he said.

So far, he has been getting good feedback from supporters and radio stations in Costa Rica, Poland, Argentina, Brazil, and Canada.

"Down to the children love it. They sing the song when they see me and do the dance to it. That brings me joy to know that kids can relate to my song and my dance move," he added.

Weddy Time looks up to artistes like Popcaan, Chi Ching Ching, and Capleton because he believes they are ambitious by nature and have taught him that you can come from nothing and still make something of yourself.

Up next for the entertainer are a music video for Currystain and a visit to Central America.

"I would be on a dance tour in Costa Rica if it wasn't for COVID. So right now, I'm just promoting the song and dance locally," he said.