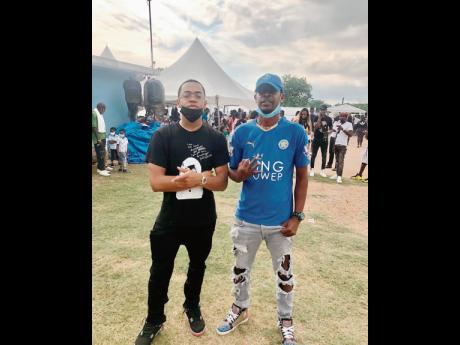 On Sunday when veteran dancehall Mr Lexx hosted a Christmas treat in his home town of Mountain View, St Andrew, he was surprised by a special guest.

In a post made to his Instagram page after the event, Mr Lexx revealed that TV star, Michael Rainey Jr, who plays Tariq St Patrick in the hit series Power, not only attended the event but also gifted some children with tablets, adding to the Christmas cheer. Mr Lexx told THE STAR that he was taken aback by his philanthropic gesture.

"I think he is close to someone from the community enuh, and I think somebody mentioned the event to him and he found us and came through, and I really appreciated that. Big ups to him and his team because that was a really good gesture. Somebody tell me say the yute from Power deh yah and mi say 'wait wah'? I was surprised," he said. "I realised that he is a total different person from the character that he plays on the show. He is way more humble and way more cool. He gave away some tablets, and that was really a good look, especially because inna these times yuh know how the stay at home thing go and the homeschooling, it kinda hard, and kids are really in need of devices, so him coming and doing that we really appreciated it."

Mr Lexx said Rainey Jr's presence also boosted the spirits of the children. He said everyone seemed to recognise the TV star and wanted to take pictures and talk to him.

"We never really wah no big gathering and all that but the children recognised him, and being the person he is, he stayed a little and took a few photos and thing. He was rapping with the kids for a while," he said.

Mr Lexx said he hosts the treat in his community every year, and said it almost didn't happen because of the pandemic. However, not wanting to disappoint the children, he and the community elders united to make it happen.