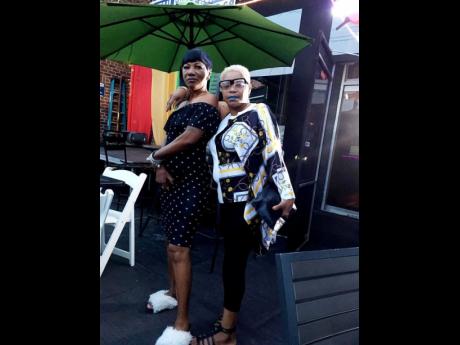 Veteran female deejay Lady Ann caused quite a stir when she paid tribute in song to her beloved friend and colleague, the late Sister Charmaine, last Saturday.

At the service and viewing, held at the Crawford Memorial Methodist Church in the Bronx, New York, Lady Ann performed the gospel song, Closer Than a Brother, which was met with approval. But when she "drew for the Glammity the whole church tun ova", Lady Ann told THE STAR.

Clips of her performance singing the x-rated song that was Sister Charmaine's first hit, have been making the rounds on social media, with some persons finding it amusing, while others are aghast. They question the appropriateness of Lady Ann performing that particular song in church, a sacred place.

But Lady Ann says she was paying tribute to Charmaine by singing one of her songs. And she is pleased that all those inside the church loved it, even the pastor.

"It wake up the people in the church. People from the back run come up the front. All the pastor was dancing. The whole church mash up," Lady Ann said. In one of the clips, persons are seen giving Lady Ann congratulatory handshakes after her performance.

Other performances came from Xanadu and Tuffist. Members of the music fraternity present at the funeral service included Supa Barry, Michael Palmer, Sammy Dread and Hanson Meditation, while Shabba Ranks and Don Angelo reportedly sent apologies, but "they helped out with the burial expenses".

It was Lady Ann who announced Sister Charmaine's death two weeks ago, explaining that she had called to speak to Charmaine, but was informed that her friend had died in her sleep.

In the mid-1980s, a teenage Charmaine McKenzie met producer Winston Riley at his Chancery Street record store in Kingston and he recognised her talent. Riley produced Glammity, and his Techniques label was instrumental in her success. Granny Advice, Strong Body Gal, Tightness and M an Look Nice were all produced by Riley.

Since her passing, tributes have been pouring in for Sister Charmaine,who was known for dominating the stage. Her performances on the Sting stage in 1988, when she appeared in a clash with Lady Mackerel and Junie Ranks, and again in 1989, when she clashed with Lady G, Patra and Lady P, are considered legendary.