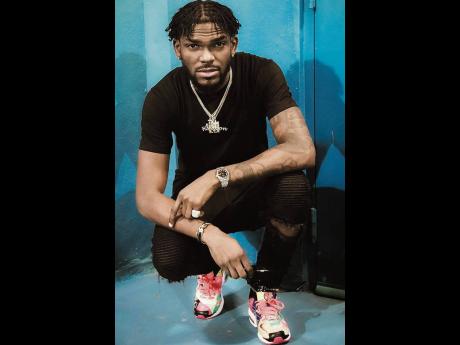 Since bursting onto the music scene in 2018 with his hit single ' So Saucy', dancehall artiste Kemar Highcon has always brought 'the sauce' to the entertainment scene.

But lately, the entertainer has been heating things up on social media with steamy performances and sultry pictures. In an interview with THE WEEKEND STAR, the 'sauce boss' who is now sporting tattoos, says he is looking to add a new flavour to his musical offerings.

"Dancehall is our culture and the genre includes sex. I think I have given the fans party music and songs weh you can dress up to, but for me, music is about experimenting. Over the past year I have gone on Instagram live a lot more than I would usually do and I have seen the requests to do more 'girl songs', more sexy material and so this is just me giving the females what they have asked for," he said. Admitting that the 'sexier side' of music is Dexta Daps' domain, Highcon says he is in no way looking to become a sex symbol.

"My core fans are younger kids so I have to try to keep a balance. I am not trying to lose fans to gain fans. For me it's all about doing things in moderation. In our culture, we get so carried away with trending sometimes that we do some things that are out of character. That won't be me," he said. Highcon is getting ready to drop the visuals for his latest single, Sneak Out.

"What's crazy about that song and video is that when I started teasing it and I put out some pictures from it, I got a lot of questions about why I am using a white female (for the video) that added to the fact that they (the viewers) are not used to me in that sexy light. I have got way more views than any other song that I have dropped so it's pretty interesting," he said.

The entertainer says he is not worried about negative feedback as people will always talk.

"So guess wah? Do weh your mind tell yuh fi do as long as you're content with it. I am content with anything you see me doing," he said.

The artiste says in addition to Sneak Out, he has a new track out with soca star Patrice Roberts called Start Up, and is working on collaborations with other soca artistes.

"I have just been doing a lot of work and trying to tap into different markets and spread my wings beyond the dancehall market. I love the Jamaican market but I feel like I can represent dancehall on a wider and bigger level for 2021," he said.