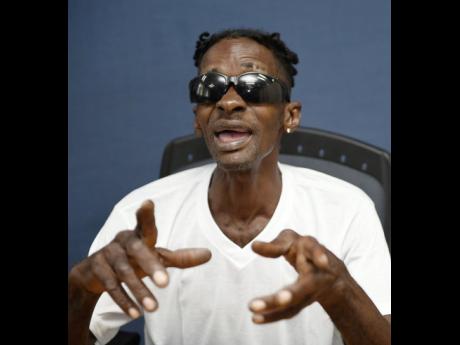 Dancehall entertainer Gully Bop lashed out at the court system and the media after appearing before the St Thomas Parish Court yesterday morning to answer assault charges.

Bop was taken into custody on June 8 after his wife made a report against him at the Morant Bay police station stating that he beat and slapped her in the face during a dispute in Nuts River in the parish, where Bop has reportedly been living.


Shortly after his $40,000 bail was extended, Bop uploaded a video on YouTube where he hurled insults towards a female journalist as she waited to interview him.

“Facebook unnu look ya, a me court and dem send da bitch ya fi come dung ya to come out come look interview. See hard eh, court eno, f***ing out a order. Unnu see the bitch out deh so stand up,” he said she he directed his camera lens towards the reporter who was standing nearby.

Later in the day, in a Facebook Live post, he ranted about the way he was interrogated inside the courtroom.

Bop said he was taken aback by the way he was questioned by court officials during the proceedings yesterday.

“Some sitten whe di woman a read out inna court pon me, mi affi say whe di bl***cl**t dis. Me just no like wah gwan dis morning. Me no like how dem a question me in front a so much people,” he said.

“Me feel so shame inna di courthouse dis morning when di woman a tell me say statement lay dung pon me say me a druggist and a tell me bout coke and ganja and whole heap a liquor and the only ting me coulda say go fi di evidence and make it carry yuh which part it see me smoke and buy drugs,” he added.

The case will be transferred to the Drug Court. According to a court official, the case is set for mention on September 6 as the complainant is overseas and will not return to the country until then.

In his Facebook rant, Bop also said persons mocked him, saying he should end up in prison "and go join Kartel and Ninja Man".

"Yuh see how people stay? But me na go a no prison cuz fadda God deh ya with me. Me nuh do nutten at all fi go prison. Dem say St Thomas a di heart a di obeah but me no see it cuz a God a my obeahman,” he said.

The court official told The STAR, that after pleading not guilty to the assault charges, the mental state of Bop, whose given name is Robert Malcolm, was questioned as he was acting strangely.

“He came to court today. He was pleaded but in light of what he was saying to the court, the judge has asked for an evaluation to be done," the official said.

The judge ordered that in addition to the evaluation, a social enquiry report should be done.