Youngster gets first taste of medicine 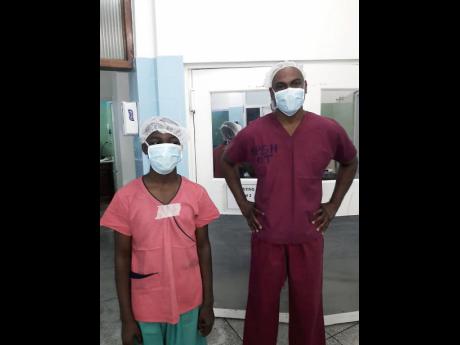 Dr Alfred Dawes (right) brought Devon Hickey into the hospital so that he could get a taste of medicine. 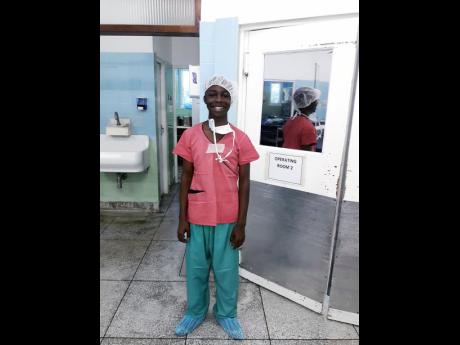 Devon Hickey's dream was made a reality by Dr Alfred Dawes.
1
2

After reading about 12-year-old Devon Hickey’s early start to becoming a neurosurgeon in THE STAR, senior medical officer at the Savanna-la-Mar Hospital, Dr Alfred Dawes invited the youngster to sit in and watch as he conducted a laparoscopy surgery.

This is a surgical diagnostic procedure used to examine the organs inside the abdomen. This allowed Hickey and the medical team to see the abdominal organs with the use of a laparoscope, which is a long, thin tube with a high-intensity light and a high-resolution camera at the front. The instrument is inserted through an incision in the abdominal wall. As it moves along, the camera sends images to a video monitor.

According to Dawes, he was impressed by Hickey’s willingness to learn, and his curiosity about the medical procedure. Hickey remarkably copped a grade one in biology in the recent CSEC exams.

“He is a very brilliant boy, and he has some probing questions about the surgery. I wanted him to be made aware that in Jamaica we are doing advance surgery, and that is the future of surgeries. So even if he doesn’t go into neurosurgery, he would have been exposed at an early age to where he ought to be because that is where the future of medicine is heading,” Dawes explained.

The doctor said that he was driven to invite Hickey to observe the procedure being done because of his own experience years ago.

“The first time he saw a laparoscopy surgery was when he was a resident at May Pen [General] Hospital. The surgeon who performed that surgery didn’t even remember that it happened and that he had met me at that time. One can never know when you are influencing persons because it was at that time that I got caught up with laparoscopy surgery, and years later I ended up studying it. We have to try and find a way to push our boys whenever we see potential and a type of willingness in them,” he said.

Dawes said that Hickey was no stranger to some of the hospital staff because he was often seen visiting his father who was a patient at the institution.

“He is a very bright boy and the nurses actually knew him because his father was actually treated at this hospital before he was transferred out. Everyone was welcoming him and wishing him well.

Hickey was inspired to study biology after his father, Devon Hickey Sr, was left paralysed from the chest down after a motor vehicle accident in Westmoreland last December.

The youngster, who graduated from Unity Primary School in Westmoreland earlier this year, said that he wanted to make a change after realising how difficult it was to get some medical resources in Jamaica.

The elder Hickey had to be flown overseas for medical assistance. Although the policeman underwent six life-saving operations, he is still paralysed. Hickey is now looking forward to starting his secondary level education at the Manning's School in Westmoreland.