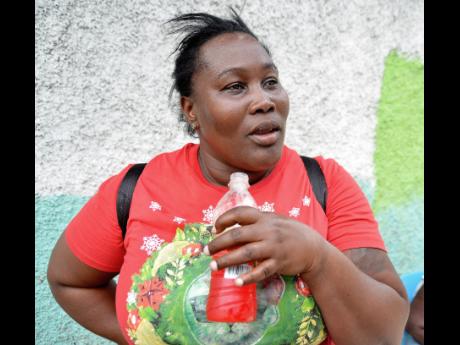 Raquel Tracey has high hopes of beating the odds, but gaining employment after completing a practical nursing course at WCO Nursing Institute, she is still unable to fill a vacancy.

Seated on the side of the road in her Mark Lane community, she said she is often filled with frustration.

"I really want to work. That's that why I pay the money and get certified. I did really well on all the courses that I took, but I still can't get a job. There are not a lot of job opportunities here, so a lot of time we sit on the corner and sometimes it just lead to a bag a mix-up," she said.

Similar sentiments were echoed by a few other females who sat with Tracey, who all said they were hoping to get a form of independence, especially owning their own businesses.

Like the majority of the other residents in the Kingston western community, Tracey was proud of Mark Lane for its low crime rate, but emphasised that they are plagued by the lack of resources.

"Me would like to see the children dem have a homework centre instead of running around after school. Me would even wa see the health centre open back and ting. The entire community want a facelift. We have water and light problem, but me nah too complain about that because we don't pay for those services, but I would want to see the place brighten up," she said.

They also have high praises for the councillor, Jermaine Hyatt, who they said has worked consistently to repair their road.

"Na tell no lie, Jermaine really help we out and fix di road, because one time we only see asphalt when we come out a the community. One time a bare sea stone we used to walk pon," said Tracey.

Mark Lane was once labelled as one of Kingston's toughest inner-city communities and remains underdeveloped as it relates to its housing and infrastructure.

The community sports mostly tenement yards, which consist of board houses, many of which are badly in need of repair.