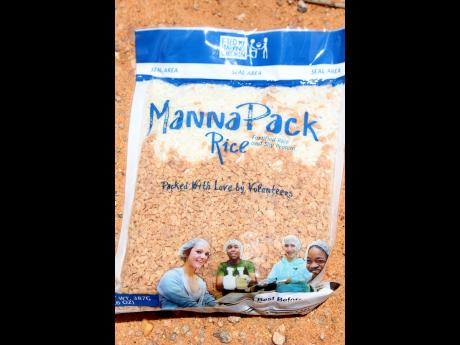 What would you do if you found out your child is being fed food which is labelled 'Feed My Starving Children'?

Rojae Kirlew, the principal of the Cassava River Primary and Infant school in St Catherine, objected to food with this label being distributed at his school.

Kirlew, who is also the councillor for Mount Industry Division, said the school received four boxes of MannaPack Rice from Nutritional Products Limited earlier this month but none have been prepared for his students.

“I have to ask my colleagues in the cluster how this thing is prepared because we didn’t know how to. This is not the first time I have seen them because I know Food for the Poor has it. Some years ago, they sent a few here, but I didn’t have a problem with that because to send them to the school in general is OK. But to send them to replace the nutritional products is where I have a big problem,” he said.

Manna Pack Rice is a formula created to meet the nutritional needs of children around the world who are severely malnourished. It is distributed by a Christian organisation called Feed My Starving Children.

The Government has removed bullas from schools as part of a campaign to promote healthier eating among students. But Kirlew, whose school once received the popular bulla, is insisting that the MannaPack Rice will never be accepted in his institution. He said that the product is unhealthy and contains excessive sodium and starch.

Attempts by The STAR to contact Grace McClean, the Chief Education Officer,  proved futile up to press time yesterday.