'Dust a kill we' - Woodpecker Avenue residents cry out 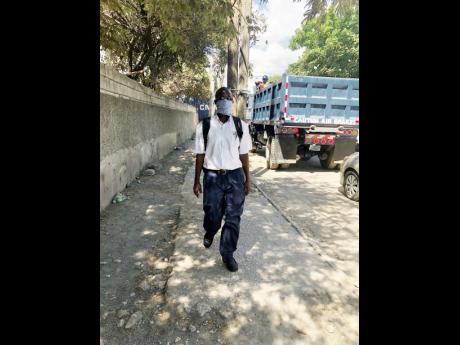 A man on his way to work shields his nose and mouth from the dust.

Residents who live and work in a section of Waltham Park Road in the vicinity of Woodpecker Avenue, say they are dying from the dust and may not live to use the roadway being developed.

Residents voiced their disgust and highlighted how they have had to surrender to the dust nuisance.

Another resident told our news team that the dust has triggered his sinusitis.

He said, "The dust bad, we affi a try hide. A bare sinus problem the people dem round ya a go have. Who nuh have it already, must have it. A di worst case this I ever see and nobody business with it. That's why a bare sick people we a go have around here."

The dust, which is apparently gathered mostly at the intersection of Waltham Park Road and Woodpecker Avenue, resembling a dust bowl, is disbursed into the atmosphere by the passing vehicles or wind.

A resident told THE STAR, "When there is traffic on the road the dust blow, but not so hard. But when the road is clear, the driver dem dust we up roun here. Food can't eat inna your own home, dust kill yuh. If yuh go on my veranda now, it come in like yuh tek yuh hand catch the dust and fling it deh."

A senior citizen told THE STAR, "The dust affect we bad bad. We soon dead off, some a we nah go get fi use the new road dem say dem a build. Dust is killing us."

Even folks who work in the area told our news team they have issues with the dust.

"I don't live here, so I can't speak to the dust entering my home. But when I walk to work I am affected; and when I go out on the road to get transportation to leave, the dust is a nuisance. They need to do something about it. It's not healthy," the worker said.

THE STAR tried without success to speak with one of the supervisors on the road project; however, our news team was told to talk directly with China Harbour Engineering Company (CHEC), the project contractors.

Several calls to CHEC were not answered.