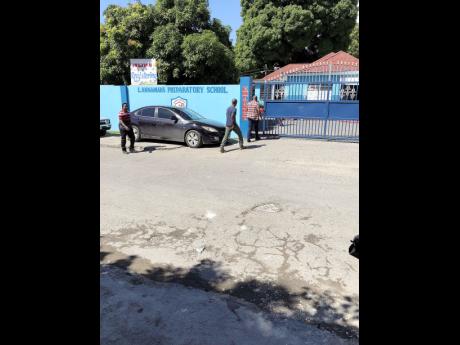 Andre Williams photo Parents and guardians rush to Lannaman's Preparatory School to pick up their children after the early-morning killing of a parent yesterday.

Investigators will be relying on footage from a closed circuit television (CCTV) camera as they seek to uncover who is responsible for the murder of a parent yesterday morning outside Lannaman's Preparatory School in St Andrew.

The deceased has been identified as Ainsley Folkes. He was killed shortly after dropping off his child at the institution.

The police team, which responded to the killing, told THE STAR that the incident may have been captured on a nearby CCTV camera.

"There are cameras around, there is a camera on the school building so it is likely that some activity may have been captured," a policeman told THE STAR as he cordoned the scene.

Shortly after dropping off their children at school, there was a rush by some parents to get their little ones away from the compound following the brazen killing.

Another parent who witnessed the attack ran after the gunman who managed to escape in a waiting Nissan Tiida motor car.

The parent told our news team: "The man nuh even dress like a gunman. If you see him, him look like a big man inna him 40s. Him dress normal. If yuh see him, you wouldn't think that was his intent. I mean, yuh can't tell but now we don't know who to look for. It could have been any of us."

Our news team was told that the lone gunman knocked on Folkes' window as he sat in the car.

THE STAR understands that as Folkes brought down the windows, the gunman reached for his waistband, pulled the firearm and shot him multiple times.

"I can't believe it. I stood by my car waiting for him (Folkes) to acknowledge me, a jus suh we move once we drop off the kids dem and see each other. Me see the man pull the gun, fire and run. Mi run after him but him manage fi escape around the road cause the car was waiting for him. Mi can't believe di man jus come and kill off the man suh," the eyewitness told THE STAR.

Our news team was told that Folkes managed to exit his vehicle where he ran on to the school compound and collapsed.

He was rushed to hospital where he was pronounced dead.

School was closed prematurely as counselling was provided and will continue throughout the week.

The St Andrew Central police said that investigations are ongoing.