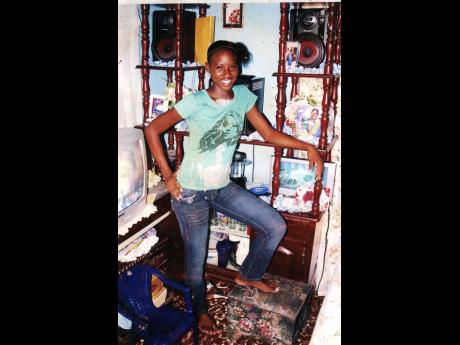 A younger picture of Shantol Chance. Her relatives say her features hadn't changed much over the years.

Residents of Farham Road in Olympic Gardens were plunged into mourning following the death of 25-year-old Shantol 'Ce Ce' Chance, who was killed on Monday in what her relatives believe was a case of mistaken identity.

Reports from the Olympic Gardens police are that at about 1:53 p.m., Chance, a mother of two, was selling grocery items in a shop when she was shot several times by a lone gunman.

Residents say Chance received several shots, including one that flew through her jaw bone.

The police were alerted and she was taken to hospital where she was pronounced dead.

Williams said that she was more devastated to learn that her daughter died after she was mistaken for another woman.

Williams told THE STAR: "She was selling in the shop for somebody. She just come from school, she went to pick up her daughter, and what I understand is that the person come in and ask for a phonecard and she gave him. Then he ordered a juice and as she reach for the juice, that's it; she not even get fi come back up."

THE STAR was told that she was killed in front her two children, who, up to the time of our visit yesterday, had not received counselling.

Williams, who now has to care for them, is seeking help to ensure that the children won't be affected.

Williams told our news team that she found out about the mistaken identity on Tuesday from the alleged intended victim.

She said: "She tell me say: 'Paula a me dem come for'. Is like she know say somebody was after her. So is like dem send fi kill a woman but dem never say if a young or old. How you fi have idea that somebody after you and you make my daughter stay in there?"

Williams said she will forever love and miss Shantol.

"It shock mi when she said it, enuh, but mi daughter wasn't a troublemaker, so mi know a must mistake. Every minute mi walk go down where me come see her lay down, cause dem did put her outside because dem did a try help her to hospital," Williams said.

Chance's younger sister described her as fun loving and jovial.

"I still can't believe I am here talking about her being dead," she told THE STAR.

Williams told our news team that her daughter always promised to better herself and help take care of her.

"What I miss about her is that she used to help me. And is a thing weh she always say: Mommy, mi a go help you in life. She was always joking around and she take care of her kids and other children," Williams said.

THE STAR learnt that there was some tension in the community earlier this year, however, residents could not say if it was linked to the killing.