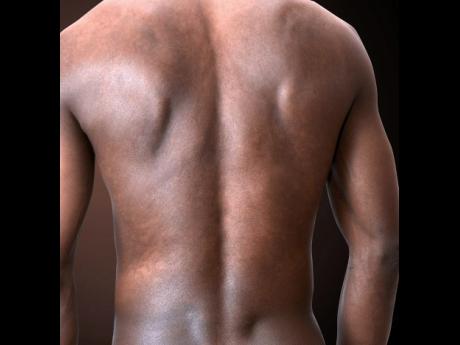 A hostile inmate created unfavourable working conditions for policemen at the Grants Pen Police Station last Friday night after he stripped off his clothes, urinated, and then defecated inside the interview room.

While handcuffed to a chair, 29-year-old Damien Wilson carried out the unusual protest to his detention, while shouting profanities at the lawmen.

Information reaching THE STAR is that the accused was earlier pointed out by a complainant. He was picked up by the police and taken to the station.

Wilson is charged with unlawful wounding. He is accused of stabbing a man multiple times in a recent incident.

But while in custody, Wilson became irate and he soon sent officers running for gloves and other instruments to deal with the mess and stench coming from the room he occupied at the station.

A policeman attached to the station, and who was on duty at the time of the incident, told THE STAR: "Him tell the police say dem must let him go or else him a go sh#@ up the station. Him strip off him clothes, then he started to urinate and told the police we nuh see nothing yet. He was there 'til him stoop and mess up the place. A dem things ya police a fi deal wid sometime when the inmates decide dem nuh want cooperate. A first mi ever see a man protest to arrest like this nastiness."

THE STAR gathered that Wilson was eventually taken to the Constant Spring lock-up where he will be housed until his court appearance.

THE STAR was also told that the police had to use pepper spray to contain Wilson, and that he was instructed to use his own shirt to clean up his mess and wipe himself.

Our news team was told that a superintendent had visited the station at the time Wilson chose to relieve himself.

"Supa hear the commotion and when we tell him, you want see the look on his face as if he was in disbelief and disgusted. Him tell them to hurry up and move him and him just leave cause him nuh want face it. All another officer hurry and finish his shift cause nobody nuh want deal with dat mess," another policeman told THE STAR.