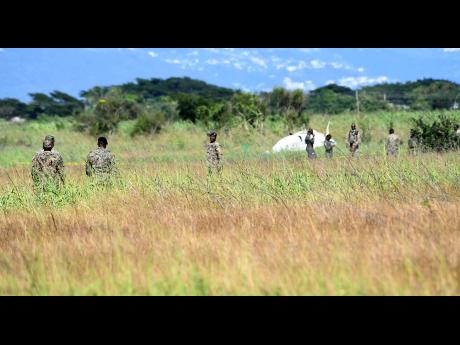 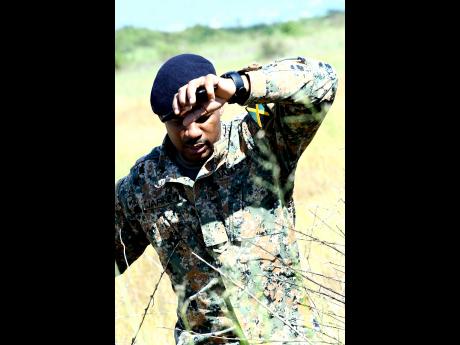 Norman Grindley / Chief Photo Editor Major Basil Jarrett of the Jamaica Defence Force, heading out of the thick vegetation after viewing the crash.
1
2

Residents in Portmore, St Catherine, were left astonished sometime after 10 a.m. yesterday as some witnessed a Jamaica Defence Force (JDF) helicopter descending from the sky in an unusual fashion.

The helicopter, a Bell 206, being flown by a trainee pilot in what the authorities say was a training flight, crashed some miles off the Dunbeholden main road.

However, before the actual crash site was found, several persons tried to carry out their own search and rescue.

Our news team first stopped along Port Henderson Road, where a large crowd had converged on a bridge, some persons pointing to the water below.

A woman said: "A over there suh mi see it guh. After that I don't see where it went. Is like a inna the water it gone."

Residents as far as Garveymeade left their homes in search of the chopper.

Portmore resident Lexus said: "Mi a say how da helicopter ya a fly so low? Mi bring it to my bredrin attention and him a say a true, so we start watch it and then we couldn't see it so we drive in this direction."

He continued: "One a di time mi think a drugs dem a drop to how it low. A suh we end up and follow it and we hear say a soldier dem a fly and meet inna difficulty."

After that, persons took to the nearby hills, adjacent to the old Forum Hotel in search of the helicopter, but to no avail.

Word later emerged that the damaged helicopter was spotted in a field in the Bernard Lodge, Greater Portmore, area.

When our news team found the actual site behind the Phoenix Park Village housing complex, the damaged craft was in the midst of vegetation in a large open area.

JDF soldiers were on hand guarding the already cordoned area.

Major Basil Jarrett, civil military co-operation and media affairs officer at the JDF, told THE STAR that the area was the most suitable place to bring down an aircraft and the pilot was able to walk from the crash site.

Jarrett said: "A JDF helicopter was able to pick him up and take him to the University Hospital for treatment. Only one passenger was on board and at this moment our main concern is obviously the health of the pilot and also preserving the integrity of the crash site. Any attempt to find out what caused the accident is going to depend heavily on the evidence we can gather. We have cordoned the area to allow the relevant investigative persons to come in and do their work."

The JDF said it could not speak to the individual's training, but the aircraft was widely used in military.

Jarrett told THE STAR: "These helicopters have been tried, tested and proven as training, platforms in many militaries worldwide so we would really like to find out what happened today (yesterday)."