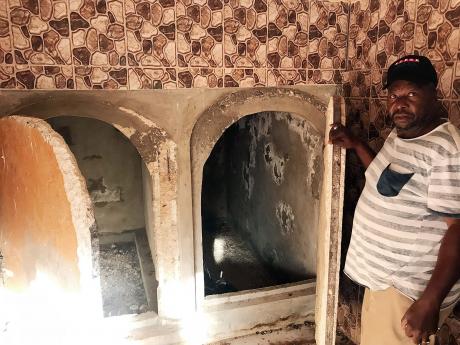 Rupert 'Dan' Williams shows off the inside of the fancy mausoleum. 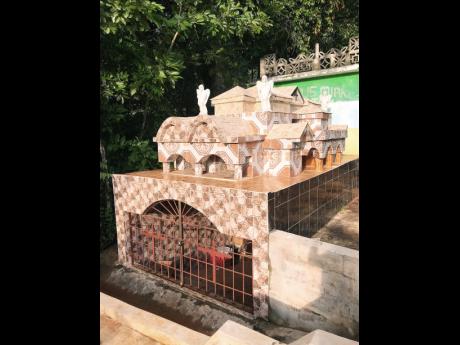 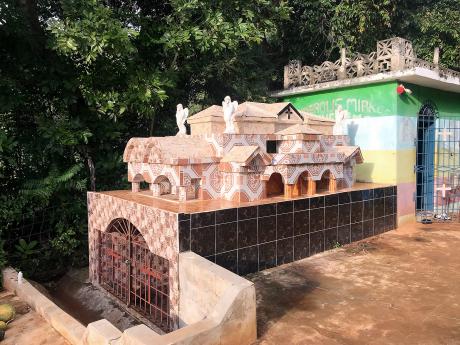 The outside of the elaborate resting place.
1
2
3

For years, Rupert ‘Dan’ Williams told his children that he would be building an expensive grave so he and his wife could rest in style and comfort when they die.

His children never took him seriously.  And so, when his son, Ricardo, saw him planning and constructing one of his latest projects, he had no idea that his dad was actually acting on his word and building his final resting place.

“My father always talked about this saying he wanted to know before hand what he will be buried in when he died.  Both my parents are in very good health and we always tell them that they will live an extremely long life, but my dad is adamant that he wants to be the person who design their graves,” Ricardo said.

In December, Dan, 62, a self-described bush doctor, completed the project -- a ceramic-tiled grave which is located in his yard at Mitcham, Goshen, St Elizabeth.

Having spent $1.5 million so far, the grave is not yet complete. Dan says he plans to spend another $700,000 to complete the sepulchre.

The money will go towards putting in windows and doors and putting the finishing touches to the final resting place.

Dan, who rejected suggestions that he is an obeah man, argued that it is not unusual for persons to make their graves before passing. He pointed, for instance, to the Bible which highlights numerous stories of persons being buried in predetermined graves. He said, too, that he is not relying in some twisted logic, which seem to suggest that persons who built their graves often live a long time.

"I just have to prepare myself and do everything in my lifetime so that my children don't have anything to do when I pass off," he said.

In addition to being tiled, grille gates have been placed on the sepulchre, which looks like a small castle.

"Me body a guh cremate. I do this as a tourist attraction. When me pass and gone dem can mek money off it. ... and for the kids to have something to look at. If you notice, most people bury now, and after a while yuh caah see dem grave, a pure bush," Dan said.

Meanwhile, Ricardo told the CENTRAL STAR that his father was not always wealthy as he struggled to care for his family decades ago. He said this fuelled his father's desire to ensure that he is sent off with dignity.

“My father story is one of ‘nothing to something. I remember when all six of us used to live in one small room but he was determined to provide a better life for his family. My mother used to wash people clothes and she would get about $1,500 per week. He would ride around on his bicycle and sell his roots and from there he went into farming and that’s how he started to build his wealth. He took loans and build himself,” he said.

“He now owns a 70-acre farm, four houses, a wholesale, a block factory, and he is all about his community as he has employed more than 25 persons from the community. He fixes the roads and even help to send children to school. His only wish is to be buried in the grave that he builds,” Ricardo added.