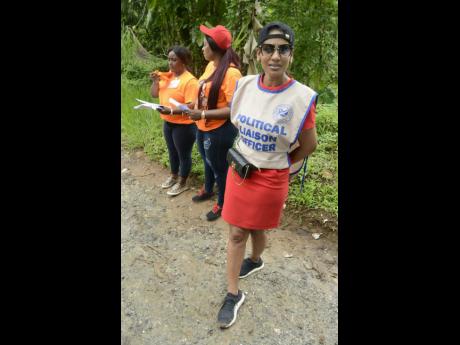 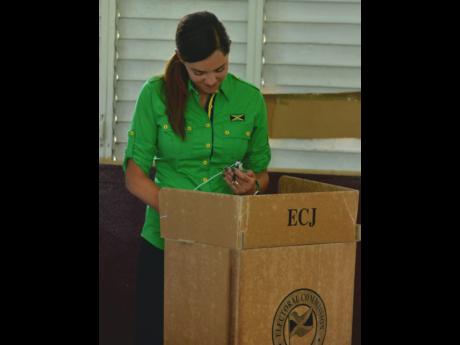 Ann-Marie Vaz casts her vote in the East Portland by-election.
1
2 Former People's National Party (PNP) general secretary, Colin Campbell, says he expects his party to poll more votes than it did in the 2016 general election.

A hotly contested by-election is being held in East Portland today as voters choose between the Jamaica Labour Party's (JLP) Ann-Marie Vaz and the PNP's Damion Crawford as their next member of  parliament. The seat became vacant following the death of the PNP's Dr Lynvale Bloomfield, who was murdered in February.

The PNP has held the seat since 1989, but the constituency, which was considered safe PNP territory, is in danger of sliding towards the JLP.

The last time East Portland swung from the PNP, some 10,196 persons voted for the JLP's Anthony Abrahams, while the PNP's Keith Rhodd got 7,827 votes.

Vaz, after casting her ballot at Drapers All-Age this morning, said she is ready to be part of history in East Portland.

"I am looking forward to going down in history. I will be the first woman to be the member of parliament," she said.

Meanwhile, Campbell, who was spotted on the ground in the hilly community of Bellevue, which is in the Fellowship division, said the party is looking to exceed the number of votes in that polling division by more than 100.

"We had a heavy downpour this morning, so it kind of delayed some of the voters' arrival at the polling station, but by about 8 o'clock, we got going. By about 10 a.m. we were at 77 voters, and we are expecting 250," Campbell told The STAR.

Bloomfield got 137 votes in that polling division to the JLP’s Wood, who got 13.

The Electoral Office of Jamaica (EOJ) is reporting a 25.28 per cent voter turnout up to 11 o'clock this morning.

There are 36,315 registered voters in the constituency. The EOJ says the 127 polling stations across 49 voting locations opened on time at 7 a.m.

Polls are scheduled to close at 5 p.m.