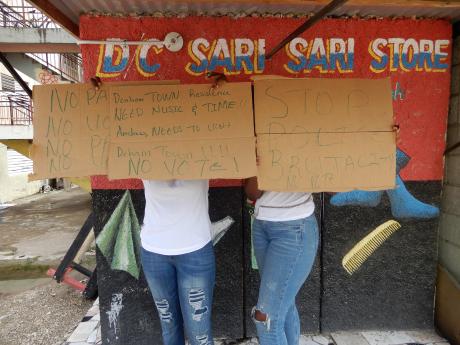 Residents of Denham Town today mounted roadblocks in a section of the community to protest against the alleged abuse of one of their own by members of the security forces. The blockage was quickly removed by the police.

The residents say that Roamaine Abrahams, an employee at the National Solid Waste Management Authority, was mercilessly beaten by a group of police after he was dragged out of his house.

"He was just about to get ready for work and up to now I don’t know why dem beat him. All the youth a ask, dem just a kick him suh, and dem can't deny it because a whole heap a video deh all bout with the incident,” a resident said.

The Police High Command is appealing for witnesses to an incident in which cops are seen, on video, abusing a civilian to step forward and provide information.

The incident reportedly took place over the weekend in the Kingston West Police Division.

The High Command said that it has instructed the Inspectorate and Professional Oversight Bureau to conduct an investigation into the matter.

Residents today said that the majority of the policemen and women working in their area are good people. One man said that "there are four of them around here that need to go".

"When those four come on the scene, a bare bad up. We can't even play ball again because dem a run we off. Nuh war nah gwan and we can't even sit down outside wi building. Sometimes we inside and see dem a pass and a lock down wi window like we inna prison,” a man said.