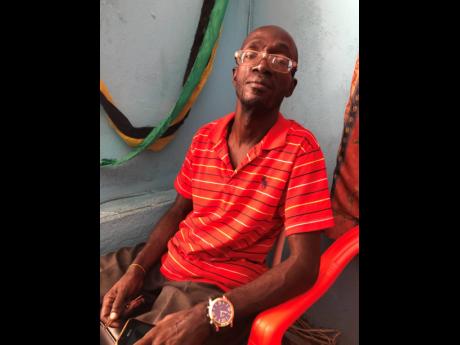 Donald Davis inside his funeral home. 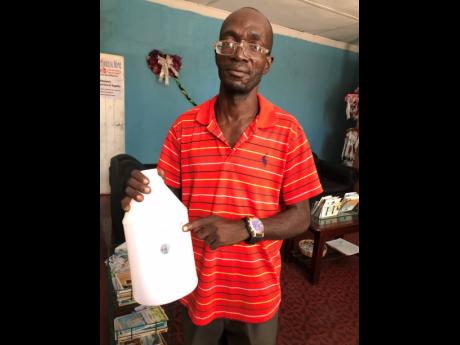 Donald Davis with chemical used to preserve the body. 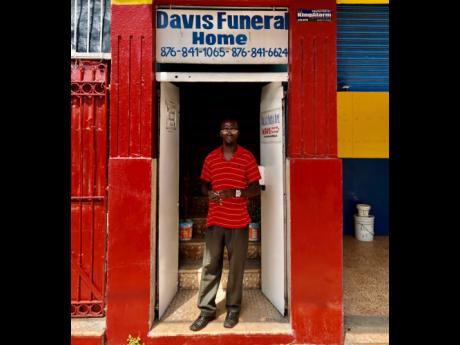 Photos By Romardo Lyons Donald Davis outside his funeral home on North Street. 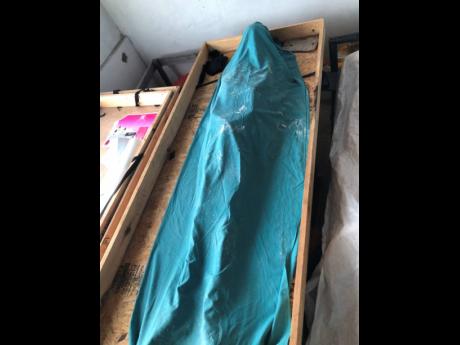 A funeral home operator says he is now beyond frustrated as he has been waiting endlessly for a family to return and bury their deceased. Donald Davis, director of Davis Funeral Home, told THE WEEKEND STAR that he has been keeping Pastor John Murdock’s body for almost a year as his family has made no plans for a funeral.

“Me have a body now for eight months. He is 58 years old, and his cause of death was cancer. Me call the family repeatedly ... . a wah tell yuh say the body came to me from February this year, and from they (the deceased’s family) came, dem nuh come back. Dem no pay no money, and I have the body in the morgue same way. I use up my resources on it and everything, so that’s a big loss for me. It’s properly embalmed ... . if it wasn’t embalmed, I would have to do away with it already,” he said.

Having been in the business for 13 years, Davis is accustomed to having bodies for long periods; however, their time at his morgue has never exceeded four months. “I have other cases like this, but never over four months. What happen is, some people can’t afford funeral packages immediately. So what I have to start do when families come with bodies is question them. I ask them who going do the burial,” Davis said.

When contacted, Patricia Campbell, Murdock’s stepdaughter, said that the family was unable to cover the funeral expenses. “None a we nuh inna no position fi pay fi nuh funeral … . we don’t have the money. He was with my mother, and she sick, so a me a tek care of her, so she caan pay either. Me nuh know wah a go happen because we can’t afford it, and him nuh have no children.”

Baldwin Spence, a friend of the deceased, said he would assist if he had the money. “Me was a friend towards the man, but me nuh have no money. Me meet him a church, and him was a sickly man, so me used to help him. He was a pastor, and him nuh deserve dis. Me go dung a PATH (Programme of Advancement through Health and Education), and me nuh get nuh help, so me cah help nobody. Me try cause a my friend, but me no have no money, and me is a sick man,” he said.

Davis says that since the body is still in his possession, he will experiment on it until the family figure out their next move.

“I like to do experiment, so I want to know how long a body can keep when I ‘balm the body and not use the fridge. Other than that, I have a private funeral home, so when I take a body, I have to ensure that it is prepared properly. I can’t just throw away a body like that, even after all that time. I could go to KSAC (the Kingston and St Andrew Municipal Corporation)for a free spot at May Pen or try to get a letter from the police so somebody can step in.”