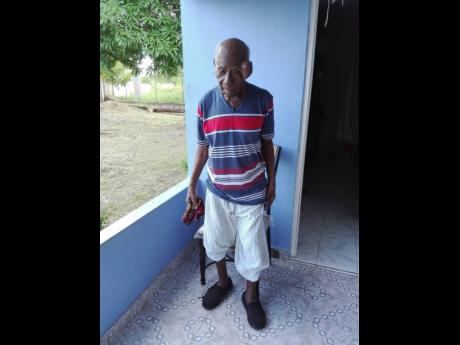 At the age of 97, Jeremiah Thomas stands as the eldest person is his Howells Content, Clarendon community.

Described as a lover of church and gospel music, Thomas said, "Me love all a the church song them, me love the whole a them."

Rodeka, on of Thomas' 10 grandchildren, said he is strong believer in God.

"He is very upbeat, always praying and encouraging us. He finishes all his prayers with 'The Lord is my Shepherd','' she said.

Thomas celebrated his 97th birthday in August. But long life is not an anomaly inhis family. One of his sisters died at the age of 99.

Thomas, whose descendants span three generations, is described by relatives as a humble, hardworking man who loves his children.

He has six of them, 10 grandchildren, and 17 great-grandchildren. He has lost his sight and is slightly hard of hearing, but Rodeka says he still prefers to do most tasks on his own.

Such independence could be aligned to the decision to venture into his own farming activities whilst employed to the Yarmouth Sugar Factory in Clarendon as a young man.

The family says he is a lover of nature and as such is the green thumb behind many fruit trees in his community.

His daughter, Susan, said that "Dada is a humble man, him nuh make trouble."