Man beaten for trying to steal Lysol, rubbing alcohol - Said he needed them to protect family from coronavirus 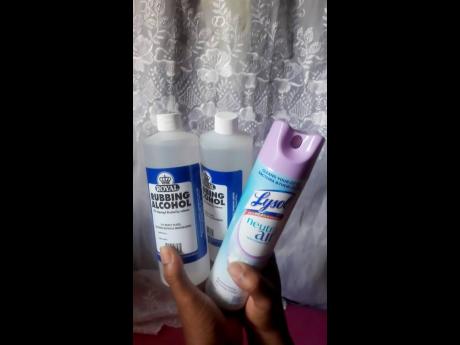 A family member shows the two bottles of rubbing alcohol, and can of Lysol spray which were taken from a robber caught breaking into their home on Tuesday night.

A Westmoreland man was beaten by angry members of a household, after he broke into their house in the Frome community and stole two bottles of rubbing alcohol and a can of Lysol spray.

He later confessed that he stole the items to protect his family from the coronavirus.

The residents said that the culprit is known to them, and works as a handyman.

A family member told THE WEEKEND STAR that about 11 p.m. on Tuesday, members of the family were at home, when they heard strange sounds coming from another section of the dwelling.

She said that a male relative went to investigate, and he immediately informed the others that he saw a man climbing in through a window.

The woman said that her father and two brothers armed themselves with machetes and quietly surrounded the window through which the robber gained access.

They waited for about 30 minutes and as he was trying to escape, he was cornered by the three men, who slapped him several times with machetes.

The woman indicated that the only reason why the robber is still alive today, is because they all recognised his voice.

"A one ting mek mi nuh chop off the boy head, is because when him a holla out ... mi kina recognise the voice," one of the men said. "When mi realise seh mi caa get fi chop the boy, mi haffe start beat him wid the machete without mercy, an what grieve mi is that mi daughter fast asleep inna the room," he said.

He added, "A mi same family dem affi beg fi him, because mi make up mi mind seh anything a anything because the boy too thief. When we search the bag, the boy thief mi two bottle a rubbing alcohol, and mi Lysol spray, an a little pan a silver."

The woman who contacted THE WEEKEND STAR said that after she begged her brothers and father not to kill the robber, he thanked her, and told her that he was only stealing the items because he wanted to protect his family from the COVID-19, and did not have the money to purchase the items.

She also said that he apologised.