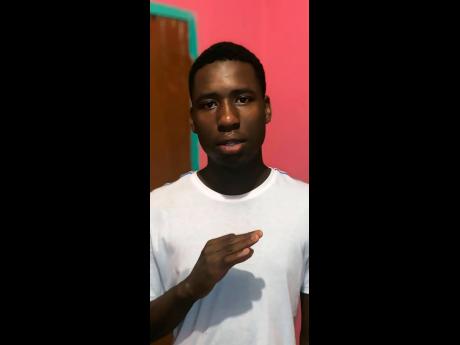 It has been a rough few days for Michelle Alexander, as she mourns the death of her son, 17-year old Kingsley Campbell, who drowned in St Ann last Saturday

"I wasn't even answering phone calls because dem affect me," Alexander told THE STAR. "From it happen, me have a terrible headache right through. A one of my neighbour come take me pressure and try to calm me so me could even get up back."

Reports from the St Ann's Bay police are that about 4:49 p.m., Campbell was at a beach in Priory with a relative, when he complained of feeling ill. The relative reportedly left to purchase food.

However, upon return, Campbell could not be found. It is alleged that an alarm was made after Campbell's clothes were found along the beach. His body was subsequently fished from the water. The scene was processed and the body was removed to the morgue pending a post-mortem.

As she reminisced about the bond she shared with her son, Alexander recalled their last interaction.

"The day when Kingsley a lef, him a pull pon me clothes and tell me fi give him a juice from me shop, and me a tell him seh me nah give him no more drinks out a the shop because when corona done, a di same shop affi send him back a school," she said. "All when me remember dem supmn deh, it pull me up. Him beg me di drinks three times enuh, and if me did know seh a dead me pickney a go dead me woulda give him it."

Campbell, a grade 11 Knox College student, was the last of five children.

"Kingsley was a brilliant child. Him did a go come out to be one of the best. Him did wah fi be a fireman, but if that never work, I was gonna send him to a school in Ochi to do a course in bartending so him could possibly go work on the ship," she said. "Now all that planning was in vain because him nuh deh here again."

Two of his teachers, Rowena Blackwood Elliston and Sheryl Simms, told THE STAR that Campbell had great potential and took pride in his academic career.

"He always tried his best and was a well-known student by all categories of staff and students. He had a positive attitude and was well respected for it," said Elliston.

Simms added, "Campbell was a dramatic, talented, sociable young man with tremendous potential. His humble personality never allowed him to be easily bothered by anyone or anything."

Alexander said that even though her son has passed, she was proud of how much of a good person he was.

"Nobody nuh have nothing bad fi say 'bout Kingsley, him and everybody mesh," she told THE STAR. "Principal, guidance counsellor, everybody affi come and pay them respect to how dem miss him."