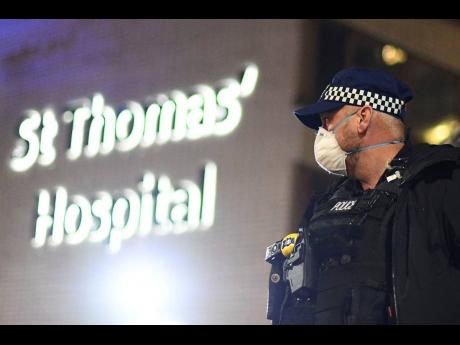 A police officer stands outside St Thomas’ Hospital in central London as British Prime Minister Boris Johnson was moved to intensive care after his coronavirus symptoms worsened on Monday.

The island now has 59 cases. The new addition is a 43-year-old male from Portland, whose mode of transmission is under investigation.

He brings to seven the number of cases under investigation. Of the other 52 cases, 30 are imported, while the other 22 are import-related.

So far, 32 males and 27 females have tested positive. The cases range in age from 12 to 87 years. The average age is 50 years. Eight patients have fully recovered while three have died.

There are currently 38 persons in quarantine in a government facility. Sixty-two persons are in isolation.

Overseas, British Prime Minister Boris Johnson, who announced that he had tested positive for COVID-19 on March 27, was yesterday moved to the intensive care unit after initially being hospitalised on Sunday.