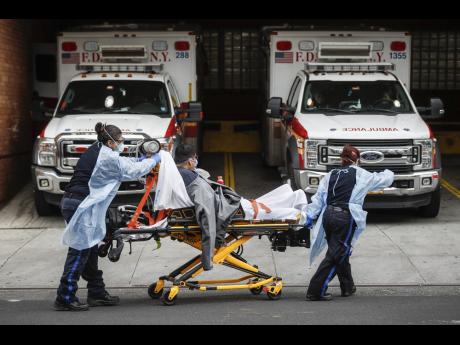 Patients are brought into Wyckoff Heights Medical Center by staff wearing personal protective gear due to COVID-19 concerns, Tuesday, April 7, 2020, in the Brooklyn borough of New York. The new coronavirus causes mild or moderate symptoms for most people, but for some, especially older adults and people with existing health problems, it can cause more severe illness or death. (AP Photo/John Minchillo)

At least 3,202 people have died in New York from COVID-19, according to the count released by the city. The deadliest terror attack on U.S. soil killed 2,753 people in the city and 2,977 overall, when hijacked planes slammed into the twin towers, the Pentagon and a Pennsylvania field on Sept. 11, 2001.

But in an encouraging sign, Cuomo reported that hospital admissions and the number of those receiving breathing tubes are dropping, indicating that measures taken to force people to keep their distance from one another are succeeding.

Across the U.S., the death toll neared 12,000, with around 380,000 confirmed infections. Some of the deadliest hot spots included Detroit, New Orleans and the New York metropolitan area, which includes parts of Long Island, New Jersey and Connecticut.