UK’s Johnson is stable in ICU with virus, received oxygen 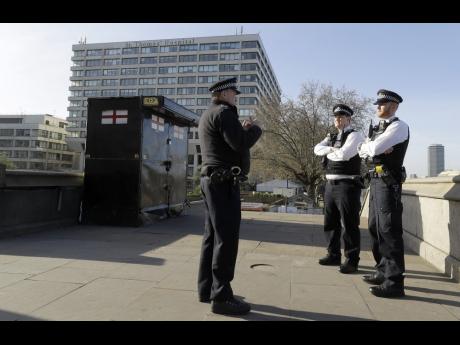 Police officers stand outside St Thomas' Hospital in central London as British Prime Minister Boris Johnson was moved to intensive care after his coronavirus symptoms worsened in London, Tuesday, April 7, 2020. Johnson was admitted to St Thomas' hospital in central London on Sunday after his coronavirus symptoms persisted for 10 days. Having been in hospital for tests and observation, his doctors advised that he be admitted to intensive care on Monday evening. The new coronavirus causes mild or moderate symptoms for most people, but for some, especially older adults and people with existing health problems, it can cause more severe illness or death.(AP Photo/Kirsty Wigglesworth)

LONDON (AP) — British Prime Minister Boris Johnson was in stable condition Tuesday in a hospital intensive care unit with the coronavirus, and while he is not on a ventilator, he is receiving oxygen, his spokesman said.

Foreign Secretary Dominic Raab has taken over many of Johnson’s duties temporarily while he is being treated at St. Thomas’ Hospital. Britain has no official post of deputy prime minister.

The 55-year-old Johnson is the first major world leader confirmed to have COVID-19. He was admitted to the hospital late Sunday with a fever and cough that persisted 10 days after he was diagnosed with the virus and was moved to the ICU Monday evening after his condition worsened.

“The prime minister has been stable overnight and remains in good spirits. He is receiving standard oxygen treatment and is breathing without any other assistance,” said Johnson’s spokesman, James Slack.

He said Johnson was not receiving mechanical ventilation or “noninvasive respiratory support.” He would not give details of what form of oxygen treatment the prime minister was getting.

Cabinet Office Minister Michael Gove said Johnson was “receiving the very, very best care from the team at St. Thomas’ and our hopes and prayers are with him and with his family.”

Johnson’s fiancee, Carrie Symonds, who is pregnant, is herself recovering from coronavirus symptoms.