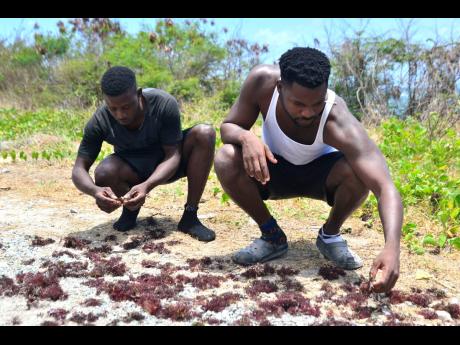 Jaheme Duncan (left) and Obrian Gary examine some of the moss they recently found.

'Tek yuh hand tun fashion' is a proverb Obrian Gary and his friend Jaheme Duncan have chosen to commit to since they have been without jobs due to unforeseen disaster brought on by COVID-19.

Gary, once a restaurant operator, and Duncan, a carpenter, are now diving for moss at a local beach in St Thomas in an attempt to survive.

Gary, 26, told THE WEEKEND STAR that he was forced to close his restaurant in Morant Bay so as to avoid possibly going bankrupt.

"About a month now it lock because of the coronavirus. Me find out say things start get slow, and I wasn't making enough money to pay my bills them or buy back certain stuff, and I could see it creating problems for me," he said.

The men, who reside in Duhaney Pen, said it was after being home for a while that they decided to explore new options.

"Tings was getting harder until me hear bout the iris moss ting, and me say me a come try it out," Gary said. "This a the only means of survival we see right now because nothing else not going on. It not like say we really want to do this, but me haffi do this to survive."

Duncan has been financially challenged since he lost his job.

"Since the whole corona ting, everything slow down and no work not going on, so when me hear about the diving, it was a way to live," he said. "Right now we a make a little hand-to-mouth stuff, but it's better than nothing,"

The news team found the men along the beach, where they often dive for moss. They explained that the sea is, basically, now their new habitat.

"We come here in the morning and stay throughout the day because we only can dive when the sea calm. Once it windy, no diving cyah happen," said Duncan.

After diving, the moss is left to dry and customers then make their purchases and take them home for different uses. Gary said that diving for moss has proved to be futile sometimes.

"The diving thing rough too, enuh because sometime we go down and nuh get nuttin or we get little here and there, and other times, we get a big bundle. We just never know what we gonna get," he said.

Having no other alternative at the moment, they are making the best of their new job.

"We just a gwan do it to see what we can make from it because we can buy food, and ting, now," Gary said.

Duncan added, "We know that we can make a good thing from doing it because other people do it, but we just start, so we hold on."