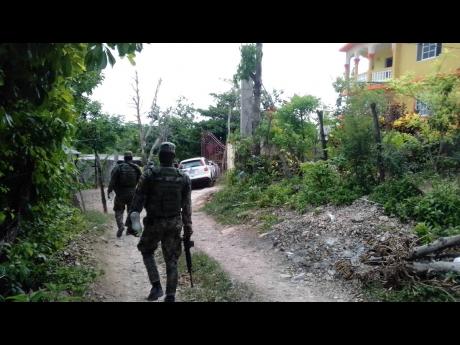 Soldiers make their way to the crime scene in Grinnion Land.

Two men who were allegedly involved in a shoot-out with members of the security forces, following an $8 million robbery in Montego Bay, St James, were fatally shot on Monday afternoon.

A manhunt has also been launched for three other men who allegedly escaped the shoot-out.

The police say one of the deceased has been identified as 47-year-old Melvin Ottey, of a Mount Salem and Grinnion Land address in Green Pond.

Reports are that shortly after noon, a team of officers responded to a radio message that armed men had carried out a robbery in the vicinity of the Westgate Hills community, allegedly robbing two Chinese nationals, injuring one of them.

The police rushed to the location and carried out an investigation which led them to Grinnion Land.

The police called in the assistance of soldiers, and carried out an operation at a yard in which a two-storey house is situated.

It is further alleged that on entering the yard, the lawmen came under heavy gunfire from a group of armed men inside the house.

The security forces returned the fire, which resulted in Ottey and another man being shot and killed. Three other men managed to escape and are now being sought.

The lawmen set up several roadblocks at various points in the community, and also shut down sections of Montego Bay in search of the men.

But family members of Ottey protested at the scene that the men were killed in cold blood, and also that Ottey was overheard surrendering to the police.

Ottey's father, Lloyd Ottey, said that his son called him and he started walking towards the house.

A woman, who said she was the babymother of the deceased, said that he was a good man, and she heard him calling out to the soldiers that he was coming out of the house, just before they Errol Chattoo, director of complaint at the Independent Commission of Investigations (INDECOM), said the investigation was in its early stages, and he could only confirm that two persons were fatally shot. But he said that INDECOM is still investigating.