Oliver Clarke had a superb sense of humour 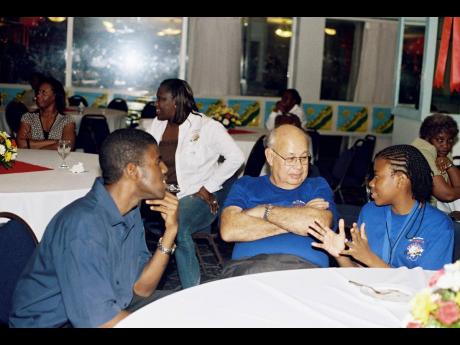 Oliver Clarke (centre) loved The Gleaner’s Children’s Own Spelling Bee competition. Here at the 2007 champions’ dinner, he listens keenly to Lawre Johnson, who was runner-up that year, and Daniel Thomas, 2001 winner. 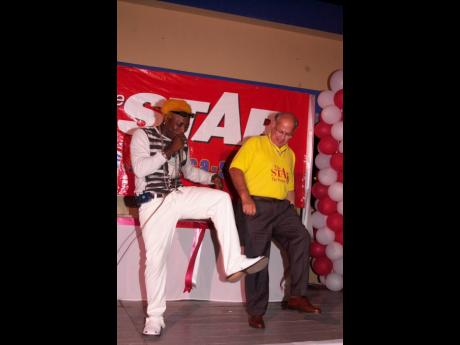 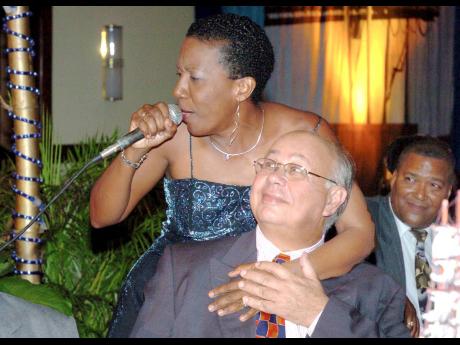 Clarke is only too happy to be serenaded by Karen Smith.
1
2
3

As tributes continue to pour in for late Gleaner Company chairman Oliver Clarke, words such as nation builder, patriot, and astute businessman immediately come up.

But not to be forgotten was Clarke's superb sense of humour, about which various individuals who lauded him yesterday spoke.

This humour was often highlighted publicly through his performances at the charity concert Powerful Men and Women in Concert.

The Broadcasting Commission, in its tribute, said that Clarke "could gently insult the powerful and pompous with such wit and style that even they would laugh".

Executive director of the organisation, Cordel Green, who himself has performed at Powerful Men and Women, said, "Oliver Clarke leaves a legacy which may never be matched."

Obstetrician and social commentator Dr Michael Abrahams, who is also known for his wit, stated that it was always a pleasure to be in Clarke's company.

"He was always very encouraging to me. I am grieving. He was someone I always admired and respected and was a support and inspiration to me. I totally enjoyed his energy and his sense of humour, and I just miss him already," Abrahams said.

Entertainment Minister Olivia Grange said that Clarke "was fun to be around".

"He had a great sense of humour. I recall on one occasion, he invited me to lunch. I arrived, expecting the usual spread, only to be told by him, 'Today, it is just the two of us and two patties'," she recalled.

Douglas Halsall, chairman of Advanced Integrated Systems, said he worked with many industries as he introduced computer services in the 1970s, but none like Jamaican National (JN) with Clarke.

He remembered that Clarke never lost touch with the average Jamaican.

"I once asked why he included the doormen in JN's staff retreat," he said. "His simple and logical answer was, 'He's the person that hears the customers' genuine after-service opinion'."

The Private Sector Organisation of Jamaica, of which Clarke was president from 2001 to 2002, said, "He was fearless yet remained humble and affable, endearing many from all walks of life with his wit and sense of humour."

Professor Sir Hilary Beckles, vice-chancellor, The University of the West Indies, said Clarke's trademark was a "sharp, critical mind, spiced with a mischievous 'wicked wit' and gentle charm of character".

Holness said Clarke "straddled the Jamaican business community like a Colossus" and "has been a major player in many aspects of the Jamaican and regional private sector".

Phillips said Clarke's death signals the end of an era in the historical development of the nation.

"Oliver Clarke was one of a kind. A successful businessman and leader of the private sector. He was also indisputably a selfless and courageous patriotic devoted to the public services in multiple spheres of national life for the past 40 years or more," Phillips said.