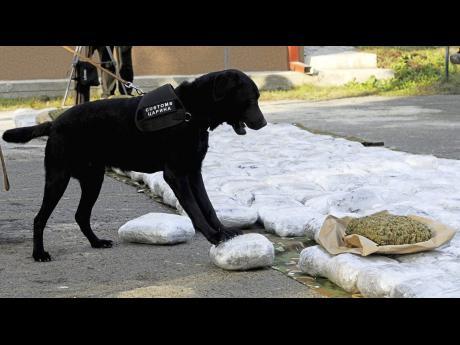 One man was arrested in a joint police operation in connection with a ganja seizure on Princess Street, Kingston  on Wednesday, May 27.

Reports are that about 11:30 a.m., the Central Police and personnel from the Canine Division carried out an operation at the business place, when the narcotics detection dog alerted the team to a false compartment in a section of a wall. Further checks revealed a quantity of illicit drug.

The weight has not been ascertained.

His identity is being withheld pending further investigations.

Shortly after, the detectives made another seizure at the Norman International Airport (NMIA) in Kingston.

Based on information received about 2:45 p.m., lawmen were conducting routine checks at the airport when they were alerted to a package by the narcotics detection dog.

An inspection was conducted, which revealed a quantity of ganja and cocaine concealed in candles and soaps. The estimated weight of the drug has not been ascertained.