Some states break virus records as US caseload grows anew 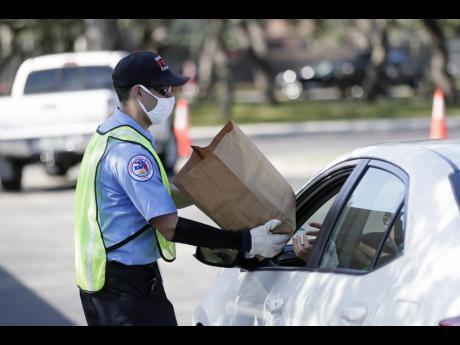 A member of Orange County Fire Rescue passes out personal protective equipment (PPE) items including disposable face masks, reusable masks and hand sanitizer to small businesses Wednesday, June 24, 2020, in Orlando, Fla. Orange County hopes to supply up to 10,000 businesses with the items over the next several days. (AP Photo/John Raoux)

HOUSTON (AP) — Coronavirus hospitalizations and caseloads hit new highs in over a half-dozen states as signs of the virus’ resurgence mounted, with newly confirmed infections nationwide back near their peak level of two months ago.

After trending downward for six weeks, the U.S. caseload has been growing again for over a week, particularly in the South and West. Some 34,700 new cases were reported nationwide Tuesday, according to the count kept by Johns Hopkins University. The number was higher than any other day except April 9 and the record-setting date of April 24, when 36,400 cases were logged.

While new cases have been declining steadily in early U.S. hot spots such as New York and New Jersey, several other states set single-day case records Tuesday, including Arizona, California, Mississippi, Nevada and Texas. Some of them also broke hospitalization records, as did North Carolina and South Carolina.

“The question of how we’re doing as a nation is: We’re not doing so well. How are we doing as a state? Not doing so well,” said Dr. Jeffrey Smith, the county executive in Santa Clara County, California, home to Silicon Valley. Nearly 5,600 people have died of the virus in California, the most populous state.

Cases are also surging in some other parts of the world. India reported a record daily increase of nearly 16,000 new cases. Mexico, where testing rates have been low, also set a record with more than 6,200 new cases.

Worldwide, more than 9.2 million people have been confirmed infected, and close to a half-million have died, by Johns Hopkins’ count.