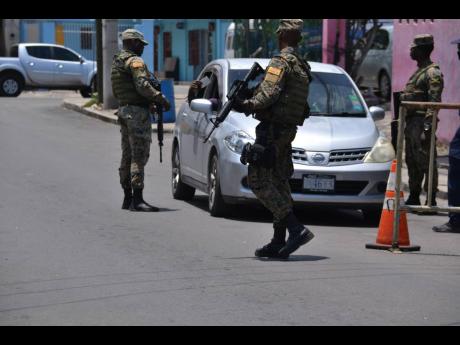 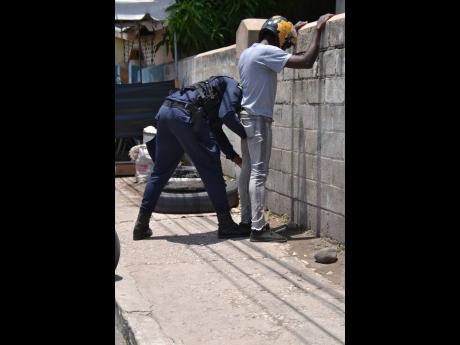 A policeman conducts a search. 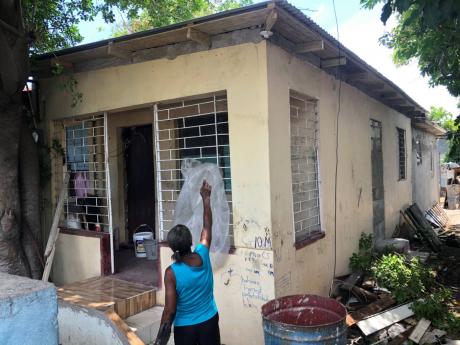 Residents of Greenwich Town in the St Andrew South constituency are expecting big changes in their community, as the area was placed under a zone of special operations (ZOSO) early Wednesday morning.

They are looking forward to an anticipated reduction in crime and violence that has eroded the fabric of peace, as well as community infrastructure and citizen development.

The ZOSO begins at the intersection of Marcus Garvey Drive and Third Avenue and extends to Spanish Town Road.

The residents hope that their community would see similar benefits to those in previous ZOSOs in Denham Town and Mount Salem.

According to Major General Antony Anderson, commissioner of police, the ZOSO that was declared in Mount Salem in 2017 has been effective, as there have been no recorded murders in the area since.

One Greenwich Town resident, who has lived there for more than four decades, said he hopes things get better.

"And I hope they stay that way when ZOSO gone, and a nuh different thing again" he told THE STAR. "At the moment ... it bad still cause gunshot buss every night! People a dead and people a get wounded. Me glad how dem come in a the place fi calm dung the thing fi di moment."

There have been seven murders and eight shootings in Greenwich Town since the start of 2020. The anxious resident says he is looking forward to the community infrastructure being retrofitted.

"Me a look forward to that ... we woulda love that! Because with the zinc fences, a man can go through any yard and come out through another yard. But if we have concrete wall, a jump a man woulda afi jump, and dat a go slow him dung. So the wall ting weh a come in, me woulda love that," he said.

Adassa Hunter, 77, who already had plans of renovating her home, sees the rebuilding element of the ZOSO as a blessing.

"My daughter was going to get some blocks to fix up the house and renovate, so I would love that! I'm hoping I will benefit from that development," she said happily.

The crime control comes as a plus, as Hunter says she has been living in fear.

"The crime is not an easy thing. Dem terrible man. I am fearful because you don't know who going to get shot. You can be walking and yuh pick up stray shot. I live with my two grandsons here and I fear for them growing up in this place. So, I believe what them doing will help out the community a lot," she said.

A university student is eyeing the education-based interventions and youth development that the ZOSO promises.

"That is a good opportunity for us as youths. Yuh have persons in a the community weh nuh have nothing at all, so dem woulda love that. Because regularly, we nuh really have no opportunities. We need more job opportunities," he told THE STAR. "It's a good step fi the community because the man dem just deh here and nah do nothing at all. And a dem thing deh mek man start rob and do all sorts a things. This is a good move, but they need to implement more social programmes in a all a di garrison dem so yute dem can turn from badness."

Another resident said some of the wrongdoers behave "like dem trigger happy".

"The ZOSO a we 'Hail Mary' because we fed up now. Honest to God, we need a real change in a Greenwich Town," the resident said.