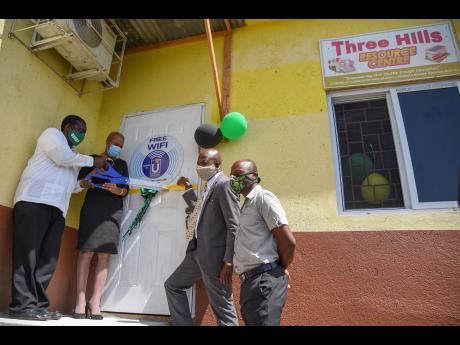 Hundreds of residents in Oracabessa and Three Hills in Tower Isle, western St. Mary, are now benefitting from internet and other related services, which are being provided at two community access points (CAP) that have been established in those areas.

The Spicy Grove Youth Centre CAP in Oracabessa, and the Three Hills Resource Centre, were officially commissioned into service on Wednesday, August 5 by Science, Energy and Technology Minister, Fayval Williams, and Transport and Mining Minister and Member of Parliament, Robert Montague.

Minister Williams said the facilities’ opening is timely, as preparations for the start of the 2020/21 academic year in September have heightened, while noting that the COVID-19 pandemic has resulted in the introduction of alternative teaching methods to the traditional classroom setting.

“Many teachers and schools are using online platforms for the delivery of content to their students. The internet, therefore, has become even more essential to our lives,” the Minister said while speaking at the Spicy Grove Youth Centre CAP opening.

Mrs. Williams, in urging the residents to make the best of the facilities, which were financed by the Universal Service Fund (USF) facilities, said online platforms are tools to maintain businesses and assist in educational pursuits.

These, she noted, are fundamental to boosting the socio-economic possibilities and prospects for students and citizens, alike.

Mrs. Williams said the Government remains committed to providing communities with facilities to access the internet and other technologies to, among other things, generate economic activity and business opportunities which will redound to the benefit of the citizens.

The Minister, however, urged individuals to use these with responsibility and care.

For his part, Mr. Montague said the facilities will be used for training of unattached young people, noting that space has been created for students to access the internet.

Meanwhile, the USF’s Chief Executive Officer, Daniel Dawes, disclosed that over 400 CAP centres have been established islandwide, with the number in St. Mary increasing to six, following the opening of the two latest facilities.

This, he said, indicates that the agency is fulfilling its mission to reach unserved and underserved communities with technology.

Mr. Dawes encouraged the administrators of the newly opened CAPs to ensure they are accessible to the public, especially the young people, emphasizing that every child who wants to use the facilities, must have access to them.