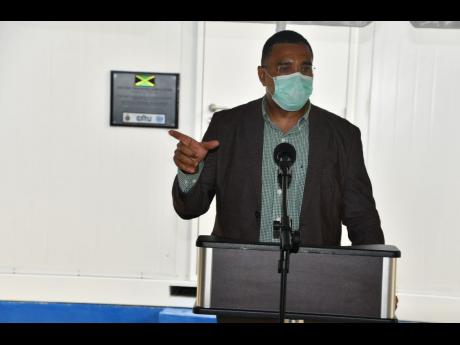 Prime Minister Andrew Holness says more opportunities are needed for the nation’s unattached youth, in order to prevent them from falling prey to criminal elements.

Speaking at the Jamaica Defence Force (JDF) Burke Barracks, in St. James on August 7, Holness said it is against this background why the JDF, through the Jamaica National Service Corp (JNSC), has been mandated to provide a viable option for young people, through training and education.

“In 1998, one of my first resolutions in Parliament was for Jamaica to develop a system of compulsory military training for all Jamaican males. I continue to believe that should be the direction in which Jamaica goes,” the Prime Minister stated.

He noted that it was important to have the JDF play an integral role in “our social intervention, security and socialisation” adding that, the JNSC was established to undertake this.

“But it was also established for another purpose. If we are to integrate upfront the security element in social intervention you need personnel…otherwise you are going to rely (solely) on force…and you will not be able to have effective intervention if you are using force,” Holness argued.

Additionally, he said: “You need along with force, presence…and in order to get presence, you need enough personnel. So we need to increase the personnel that we have in order to complement the Jamaica Constabulary Force (JCF) and other agencies that are operating within spaces that are targeted for social intervention.”

The Prime Minister further noted that the JNSC programme was designed to bring young people into a regimented programme, assist in expanding the ability of the JDF to give “presence,” and to increase the levels of skills training in the society.

“The truth is that not everyone who gets into the JNSC will be able to matriculate full time into the army. However, they would have gotten a year or two of solid training in which they will then be able to go out into the society with those skills where they can contribute to economic development,” Mr. Holness stated.

JNSC was established in 2017 as part of Government’s Housing, Opportunity, Production and Employment Programme (HOPE), which aims to provide educational and job opportunities for young people.