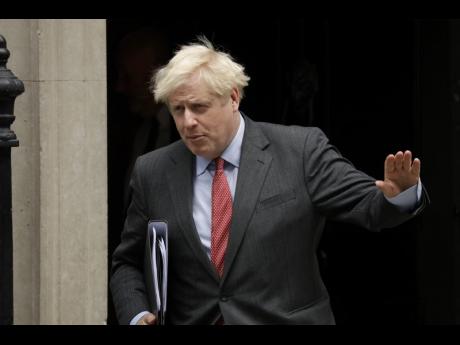 British Prime Minister Boris Johnson waves at the media as he leaves 10 Downing Street, in London, to go to the Houses of Parliament to make a statement on new coronavirus restrictions Tuesday, Sept. 22, 2020. (AP Photo/Matt Dunham)

LONDON (AP) — Prime Minister Boris Johnson warned Britons on Tuesday that they should not expect to return to a normal social or work life for at least six months, as he ordered new restrictions that his government hopes will suppress a dramatic surge in confirmed coronavirus cases.

Saying Britain must act now or face a huge second wave of COVID-19, Johnson announced a package of new restrictions that includes requiring pubs, restaurants and other entertainment venues in England to close down between 10 p.m. and 5 a.m. and urging people to work from home where possible.

Johnson had encouraged workers just weeks ago to go back into offices to keep city centers from becoming ghost towns, and he expressed hope that society could return to normal by Christmas.

In a stark change of tone, he said Tuesday that “for the time being, this virus is a fact of our lives.”

“We will spare no effort in developing vaccines, treatments and new forms of mass testing, but unless we palpably make progress, we should assume that the restrictions I have announced will remain in place for perhaps six months,” Johnson told lawmakers in the House of Commons.

The announcement came a day after the government’s top scientific and medical advisers said new coronavirus infections were doubling every seven days and could rise to 49,000 a day by mid-October if nothing was done to stem the tide.

On Monday, the government reported 4,300 new confirmed cases, the highest number since May and four times the number seen a month ago.

The new restrictions require face masks to be worn in taxis as well as on public transport. The size of some gatherings is being curtailed, with weddings limited to 15 people instead of 30, and a plan to bring spectators back into sports stadiums starting in October is being put on hold.

Johnson did not reduce the number of people who can gather indoors or out, which remains at six.

The British government is also increasing the penalties for breaking the rules.

People who breach orders to quarantine face fines of up to 10,000 pounds ($12,800) and businesses that breach “COVID-secure” rules can be shut down.

The measures apply only to England.