Visually impaired man robbed of over 100lb of chicken 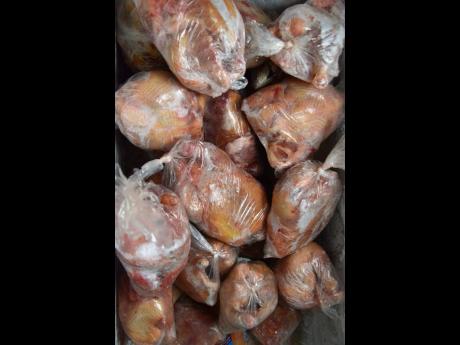 Some 100lb of freshly killed chicken was stolen from a visually impaired man.

Donald Cranston, 72, says the approaching Christmas season may be the worst he has ever experienced, after being robbed of 110lb of chicken, monies from which would have been used to replenish his stock and pay for his medication.

Cranston, who suffers from glaucoma and cataracts which have compromised his vision, has been a chicken farmer for most of his life.

He said last Thursday, a strange man, posing as a buyer, robbed him of all the chicken he had ready for sale.

"A gentleman man came in a white Tiida and said to my stepdaughter that he heard we sell chicken and he wanted 200lb. I didn't have as much plucked ones, so I weighed out 110lb and he said he would get the balance further up the road," said Cranston.

He said a young man who was in the yard confirmed that he knew the potential buyer, and that gave him the confidence to proceed with the transaction.

"He (potential buyer) said to the guy that he must put the 110lb in the car trunk and allow him to go get the other 90lb up the road. But I told him to give me my money separate. By the time the guy put the chicken in the trunk and go back out there to collect the money, the man sped off," he said. Cranston said while the vehicle was parked, the trunk was opened, so he could not see the licence plate.

Cranston said luckily, the surveillance camera at a block-making facility close to where the incident happened captured everything. But he told THE WEEKEND STAR he has not been getting the support he needs from the police.

Cranston said on his final trip to the Porus police, they told him to take four copies of the picture, give one to them, and another to the Four Paths police, and request that the photos be resized and then taken to the detective office.

"Now tell me! As a taxpayer, working so hard in this country, what must I do about this? You see why crime is so rampant in this country? You mean to tell me they couldn't take the picture and do what they should and find this man?" the distraught man questioned. "This season more than bleak because me can't even buy me eye drops, and every time me go buy things it's $6,000, and right now I would not go back to those police because what good will it do."

When THE WEEKEND STAR contacted the Porus Police Station, a man who identified himself as a constable said the details of the incident could not be divulged and that the police were still investigating the matter.