Gov't to reduce spending by $3.5 billion 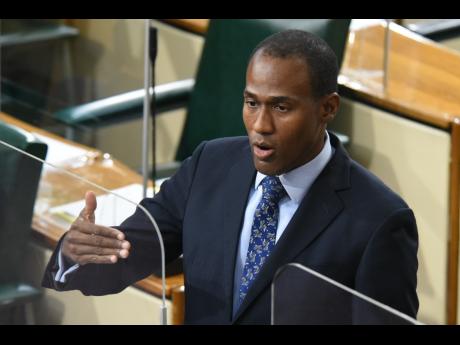 Minister of Finance and the Public Service, Dr the Hon. Nigel Clarke, speaking in the House of Representatives on January 19.

Minister of Finance and the Public Service, Dr. Nigel Clarke, on Tuesday, tabled the third Supplementary Estimates for 2020-21 in the House of Representatives, which showed a $3.5 billion reduction in spending for the fiscal year.

The revised budget proposes a reduction in expenditure from $853.8 billion to $850.3 billion.

In his remarks, Dr. Clarke said that the COVID-19 pandemic continues to impact the Jamaican economy.

He noted that after the approval of the second Supplementary Budget in September 2020, the forecast of the gross domestic product (GDP) contraction for the fiscal year was revised from a decline of 7.9 per cent to a decline of 11.6 per cent.

“As noted before, for the seven months to October 2020, revenues were slightly ahead of budget. However, by the end of December, that margin was erased and with great effort by the revenue administration team. Revenues were on target for the nine months ending December 2020,” Dr. Clarke said.

“The expectation is that revenues for this quarter will be affected by the prolonged nature of the pandemic. The significant adjustment in the growth rate translates to lower revenue than estimated for the second Supplementary Estimates, and therefore, the need for a downward adjustment of budgeted expenditure as we seek to ensure the maintenance of microeconomic stability,” he added.

The estimates are to be reviewed by the Public Administration and Appropriations Committee (PAAC) this Thursday, January 21.