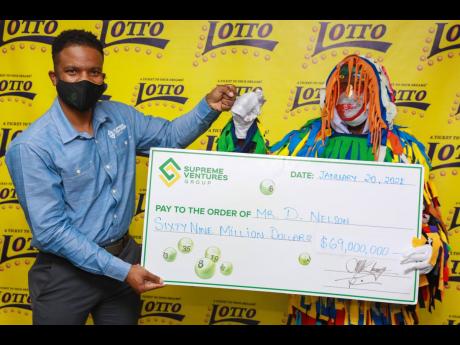 D. Nelson struck gold in the Supreme Ventures Limited's (SVL) Lotto on January 6 with the help of friends and family from the other side.

Nelson, who purchased his ticket at the Gayle Liquor Store in St Mary, said he also used his trusty rake book to break down the meanings in the dream.

"I dreamed about some friends and family who have passed on and used a book to interpret the dreams. I had a dream that I stepped in mud and I know that mud and dirt is 30. I picked out six numbers from the dream, the dream had a house, married woman and some others. I bought all the rakes in the dream," he said.

Nelson says he has played Lotto religiously since the game began as a way to escape hardship that has defined most of his life.

"I was raised by my mom, a single mother with several siblings. I never really had an education, but I did what I had to do to survive," he said.

Sharing that he only has plans to assist his children and invest, Nelson says he is humbled by the win and is considering hanging up his rake book to give other players a chance at the jackpot.

Stefan Miller of Prime Sports (Jamaica) Limited, the SVL subsidiary with responsibility for the Lotto game, says the jackpot hit is a good start to 2021.

"We are in the business of creating winners every day and all our operations are geared towards helping Jamaicans live their best life with games built on fun and integrity," he said.