Castle for the apostle - Westmoreland church leader to live in style 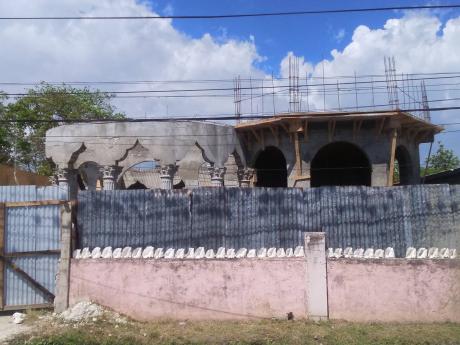 Photo shows the ground floor of the gigantic house being built for Bishop Winston Baker, at Rose Street, in Savanna-la-Mar, Westmoreland, which has received backlash from some persons.

The construction of a house for a minister of religion in Savanna-la-Mar, Westmoreland, has been creating quite a stir.

The dwelling, which is being constructed for Bishop Winston Baker of the King Jesus Pentecostal Fellowship Church, is described by his most trusted followers as 'a castle for the apostle'. It is being built at Rose Street, and is being called 'Apostle Mansion' by residents.

Elder Terrace Mullings said that the money being used on the house is the Bishop's own cash, some of which he obtained as love offering from persons for whom he successfully petitioned divine intervention.

"People dem appreciate weh God a use him fi do weh nuh other preacher naah do," Mullings said.

Repeated attempts to speak with Bishop Baker proved futile. However, Mullings, who claims to have been friends with Baker since the days when they were dancers in a group called Fresh Boys, said the church leader is being rewarded by God for his good works. "He is driving a Benz van now and he had an (BMW) X6 before," Mullings said.

He told THE WEEKEND STAR that the X6 was a gift from a couple in the United States. He said that man called Baker and told him that his wife had stage 3 cancer. Baker prayed for her and she was healed.

"When the man did a ride bicycle come a church, dem used to say him is a man of God, but now him stop ride bicycle and a drive one a di vehicle weh not even bank manager can afford, dem a say things," Mullings said.

Mullings said that King Jesus Pentecostal Fellowship Church is known as the place where people have been getting healing from illnesses such as cancer and HIV.

A video surfaced on Facebook recently which shows several persons labouring on what is said to be the massive house under construction. While the church members appear happy to help contribute to build their leader's house, some persons in the town have been frowning at the fact that Baker appears to have an expensive taste.

"Mi respect him as a good pastor and as a good person, but I can't see through the rest a church members dem a give up dem labour fi build such a mansion fi him," one woman said. "Nuh get mi wrong. Mi nuh seh Pastor Baker nuh fi live good because him deserve it, but cho man, deh size house deh weh mi see him a build, that to me a vanity."

However, Mullings has sought to counter the argument that Christians should not seek to be comfortable and own expensive things.

"If a person poor and say him a Christian, him poor because him naah do something right. And if you are poor, how can you prove to a person that is poor that God can take you out of poverty? You have to be poor first, then God tek yuh out, then yuh motivate somebody that is in that situation and that person will believe," Mullings said.