INDECOM launches probe into trimming of dreadlocked teen in lock-up 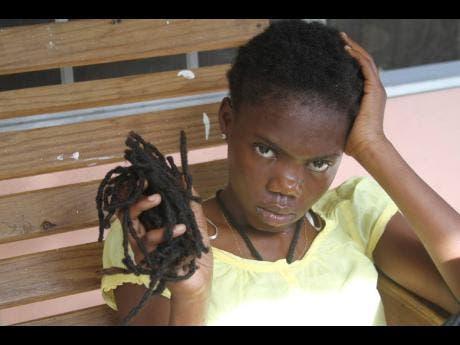 Princess Nzinga Candace King, 19, with a handful of her dreadlocks she save after she was allegedly trimmed by a cop.

The Independent Commission of Investigations (INDECOM) has commenced a probe into an allegation and complaint of abuse of rights for the trimming of a dreadlocked teenager, allegedly by a police officer.

Princess Nzinga Candice King, 19, a Rastafarian, alleged that her hair was trimmed while she was in custody at the station on Thursday, July 22.

The teenager was taken into custody by the police on a charge of disorderly conduct following an altercation with the police. Her mother, Shirley McIntosh, said the teen was held at the Four Paths Police Station from Thursday, July 22, to Monday, July 26.

In a statement today, INDECOM said it views the allegation as a breach of rights as afforded to all citizens, under the Charter of Fundamental Rights and Freedoms.

"These rights, as entitled under the Constitution of Jamaica, include the right to equality before the law, the right to humane treatment by any public authority and the right to freedom from discrimination on the ground of race, place of origin, social class, colour, religion or political opinions," the statement read.

INDECOM says its enquiry will seek to determine the actions of the police officers while the teen was in police custody, to determine if rights were breached, according to the law of Jamaica, and to make pertinent recommendations.

The Commission says it has been in contact with the attorney and mother of the teen to further its investigation.

"While the Commission acknowledges the steps taken by the High Command of the Jamaica Constabulary Force (JCF) in this matter, the allegations regarding the treatment of persons in State custody requires independent enquiry," it said.