ONE MINUTE READS ... News from across Jamaica 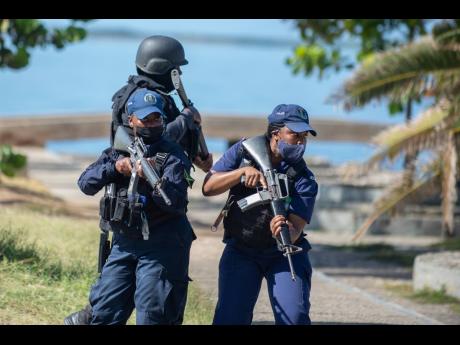 Members of the Jamaica Constabulary Force conduct a special ops training exercise at the Kingston waterfront in April.

Four firearms--including two high-powered weapons -- were seized by police during an operation on Cherry Tree Lane, Four Paths in Clarendon on Thursday.

The cache, comprising one AK-47 rifle, one AM15 rifle, a Smith & Wesson 9mm pistol, one .44 Magnum revolver as well as a bullet proof vest and more than 340 rounds of ammunition, was found in a barrel during a search of a premises.

According to the police, a party consisting members of the May Pen CIB, Area 3 Major Investigation Division and the Operational Support team, and the specialised operation conducted the operation between 4:20 a.m. and 5:45 a.m.

No arrests have been made in connection with the find.

Data from the police indicate that more than 480 illegal firearms and in excess of 6,500 rounds of ammunition have been recovered since the start of the year.

Two men were arrested in connection with the seizure of a firearm at a candlelight vigil that was being held Quarry Hill, Spanish Town in St. Catherine on Wednesday night.

The Corporate Communications Unit of the Jamaica Constabulary Force said that members of a joint police/ military team were conducting an operation in the area when they were alerted to the candlelight vigil.

The police said that on their arrival, two men were seen acting in a manner that aroused their suspicion. They were accosted and searched along with the motor vehicle that was in the vicinity. During the search, one Astra A70 9mm pistol with a magazine affixed containing five 9mm rounds was found.

The identities of the men are being withheld pending further investigations.

A 28-year-old resident of Fellowship district in Portland has been arrested and charged with breaches of the Firearms Act following an incident on Wain Road, in the parish on September 4.

The police said that the man, Calvin Downer, has been charged with shooting with intent, illegal possession of firearm and ammunition and shop breaking and larceny.

Reports from the Port Antonio police are that about 12:15.a.m., lawmen responded to a case of robbery in the area when men were seen at a gate. They were accosted and while being searched a tussle developed between Downer and one of the officers. Downer allegedly pulled a firearm and pointed it in the direction of the officer and opened gunfire before escaping in the area, leaving several stolen items behind.

Downer later turned himself in to the police and was charged after an identification parade.