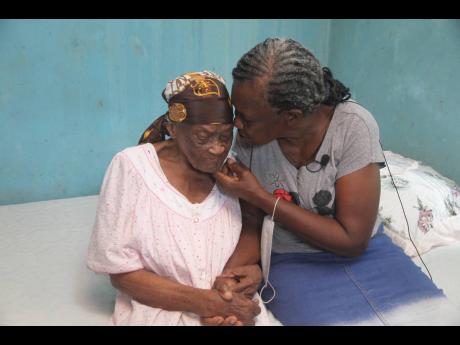 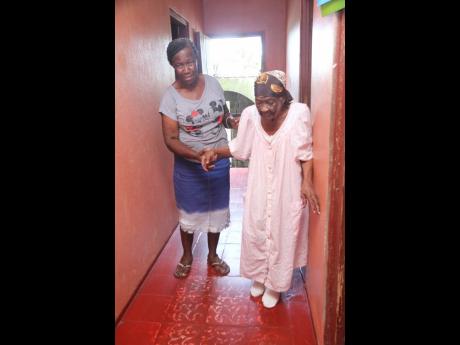 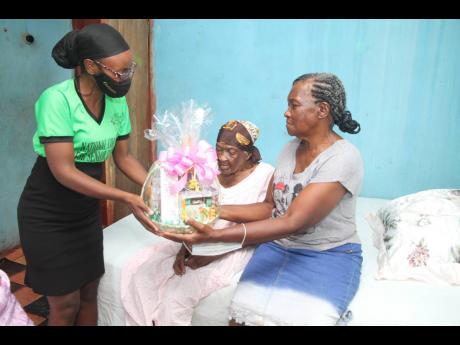 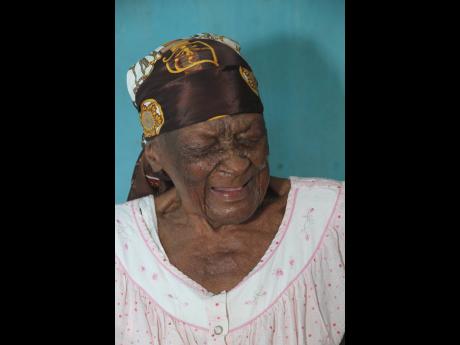 Louisea ‘Mama Lou’ McDonald sings one of her favourite hymns.
1
2
3
4

At 110 years old, Louisea McDonald is Jamaica's oldest resident. Affectionately called 'Mama Lou', McDonald is described as a talkative and jovial individual - qualities that were evident when THE STAR visited her home in the farming community of Bog Hole in Clarendon last Saturday.

Though she lost her sight, when the news team entered her home, the centenarian asked, "A which young man that? I would a married again."

She sent the room in laughter again when her daughter indicated she was not able to see, igniting a sharp response from the centenarian: "Me can glimpse!"

Mama Lou, whose hearing is limited, was heard mumbling to herself with questions about her husband.

Her 71-year-old daughter, Phyllis Black, explained that most of Mama Lou's conversations are centred around marriage. Black theorises that the talks stem from memories of her late husband of three decades, who was an ex-soldier.

"He took care of us and he took care of her. That is why she keep talking about her husband because they were so loving," Black told THE STAR.

Black, Mama Lou's seventh child, praised her mother as a hard worker, who toiled as a farmer to fend for her 10 children - three of whom have passed.

When asked how many grandchildren Mama Lou has, her daughter said, "The other day me reach 100 and stop count."

Admitting that caring for the centenarian has not been an easy feat, Black is, however, enthused to still have her mother around, and is committed to giving her the best care.

"I'm feeling elated to know my mother is still alive and can take the care I can give her," she said.

"She eats soft food like Irish potato, soft yam and soft banana but she nuh want it crushed, you can't crush it give her. I give her Ensure and Complan, and she nuh like the juice with no taste, she want something sweet at all times," Black told THE STAR.

Mama Lou, who hummed and sang throughout the interview, was reportedly an integral part of the choir at the New Testament Church adjacent her home.

"She was a very active member of the church," said Black.

Toshane Young, from the department of the National Council for Senior Citizens within the Ministry of Labour and Social Security, presented Mama Lou with a gift. She said the department has a mandate to cater to the needs of seniors by promoting healthy and active ageing.

Black said Mama Lou catered to many children in Bog Hole and is adored and loved by community folk.

The centenarian will celebrate her 111th birthday on December 1.