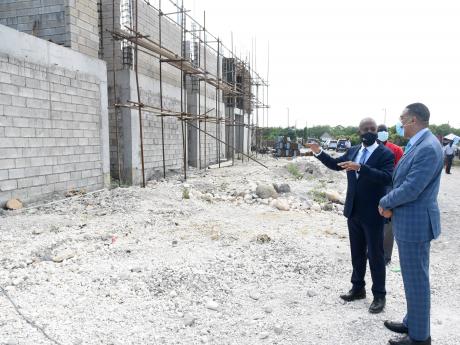 Prime Minister,  Andrew Holness, says that Port Royal is a valuable historical asset, and the Government is committed to ensuring that the area is developed and maintained for the benefit of Jamaicans.

“Port Royal is a historical gem for Jamaicans, and we can’t have such an asset just sitting idly by,” he said.

Mr Holness was speaking to journalists during a recent tour of the area, where he expressed satisfaction with the progress of the Port Royal development project.

The works are being undertaken by the Urban Development Corporation (UDC) and the Port Authority of Jamaica (PAJ), in collaboration with other agencies.

The aim is to transform the historic town into a thriving centre for tourism and includes restoration of Fort Charles and Giddy House, building a museum, and constructing attractions to complement the Port Royal cruise pier – built under the development project – which welcomed its first cruise ship in January 2020.

There will also be improvements in the housing stock, water system, roadways, and drainage network.

Prime Minister Holness said that an important objective of the multi-billion-dollar development is the preservation of the artefacts at Port Royal to benefit generations to come.

He assured that the project will remain “true to history” and allow Jamaicans and visitors to get a sense of what Port Royal was like.

President and Chief Executive Officer of the Port Authority, Professor Gordon Shirley, said that on completion “no other territory in the region will have anything resembling what will be in Port Royal.”

He informed that construction is slated to be completed by the middle of next year, and “Jamaicans will be enjoying the benefits. This is not just built for cruise ships. This is really for Jamaicans, and we want this to be something for Jamaicans to come, learn some lessons from the history, and feel enthused about where we have come, and then be entertained.”