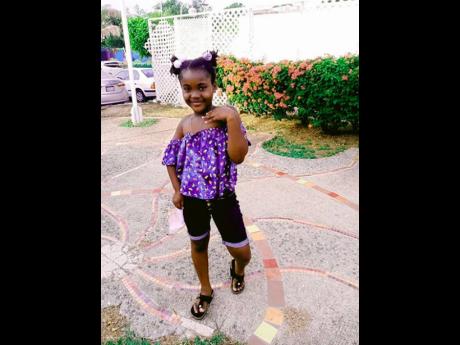 A St Catherine family is seeking help from the public to send their 'miracle baby', seven-year-old Cathalia Hayles, overseas in order to get medical treatment for her left arm which has been partially paralysed since birth.

Cathalia's mother, Korrell Jackson, 36, who also has three other children, told THE WEEKEND STAR that her 'wash belly' has been defying the odds even as she was diagnosed with right shoulder dystocia three days after birth at the Spanish Town Hospital. Shoulder dystocia is when, after vaginal delivery of the head, the baby's anterior shoulder gets caught above the mother's pubic bone. Cathalia has not been able to use both arms equally and the condition causes her a great deal of pain. But the mother said that Cathalia's story is miraculous as doctors told her that her baby could suffer brain damage, develop kidney problems or completely lose her hearing because of a difficult pregnancy.

Cathalia was born with a blood count of two, which is four digits below the average low rate that would classify babies as high risks after birth. However, Jackson said she has pulled through the worst.

"She is very fun. She will look me in the eyes all the time and say 'Mommy mi love yuh, enuh'. And she is brilliant for her age. One minute talking to her and you will soon realise that she is destined for great things," Jackson said. She said that when she was pregnant with Cathalia, she did not do an ultrasound as she could not afford one.

"So the day before I went into labour, it was discovered during my last clinic visit that the baby's shoulder was too broad and I was told that I will have to do a C-section. I was a bit disappointed in hearing that because I wanted to do a home delivery," said Jackson. She explained that soon after she went home from her clinic appointment she had to rush to the hospital as the contractions increased. A few hours later she gave birth, but she said that doctors explained that "the nerves and ligament in the arm were damaged as a result of the force used to turn the baby during labour".

Jackson said they have spent more than $500,000 in medical expenses trying to fix Cathalia's arm but to no avail. Their only hope, Jackson says, is to seek medical treatment overseas which could cost them in excess of US$7,000 (approximately J$1.08 million).

"They said because the surgery is so technical it is best to have it done overseas," she said.